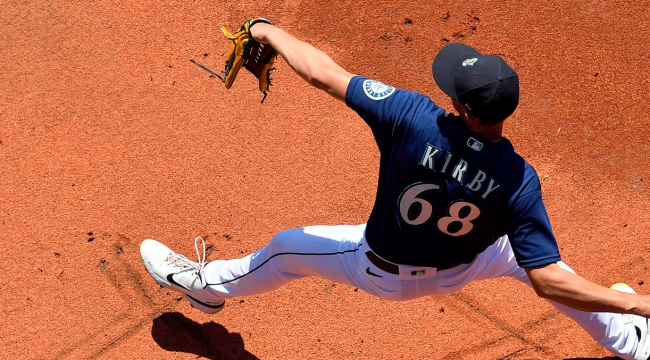 One of the things about watching any baseball game is the fact that with the plethora of statistics that have been compiled over more than a century there’s always a chance that some sort of record might be broken or tied.

Sure, it might not be a very important record like say, someone hitting four home runs in a game or hitting two grand slams in a single inning, but sometimes it’s the weird, obscure records that are actually the most interesting.

Case in point: baseball fans sitting down to watch the Seattle Mariners game versus the Washington Nationals on Wednesday night had no idea that they were about to witness a record being broken.

24-year-old rookie pitcher George Kirby, who is having a very nice year so far with a 3.32 ERA in 18 starts, began the game on the hill for Seattle.

In the top of the first inning, Kirby set down Nationals’ leadoff hitter Cesar Hernandez on three straight strikes. They he gave up two singles on 0-1 counts. Then Nelson Cruz singled on the first pitch Kirby threw to him, scoring a run. Keibert Ruiz then hit into a double play on a 0-1 count, ending the inning.

So after one inning, Kirby had thrown 10 pitches and all of them were strikes. Interesting, but not a huge deal.

However, the young right-hander was only getting started.

In the second inning, Kirby faced three Nationals batters and threw 8 pitches – all of them strikes. Now we’re up to 18 straight strikes to start the game for Kirby and people are starting to notice.

In the third inning, Victor Robles goes down on three straight strikes, Hernandez singles on a 0-2 count, and then the first pitch to the next batter, Joey Meneses, is… a ball.

That made it 24 straight pitches for strikes to start the game for Kirby, a new Major League Baseball record.

The previous record for consecutive strikes thrown to start a Major League Baseball game was 21, set by Brett Cecil for St. Louis in 2017. It was later tied by Joe Musgrove when he was on the Pittsburgh Pirates in 2018.

Naturally, a compilation video of George Kirby’s record breaking performance made its way on to social media and it’s rather mesmerizing to watch.

George Kirby set an MLB record today when he didn’t throw a ball until his 25th pitch. 😱

George Kirby opened today's game with 24 straight strikes before throwing his first ball … Per @heygoldy on the broadcast, that's an MLB record to begin a game. pic.twitter.com/1NST5qXiVr

FINALLY someone listened to their coach!!! “Just throw strikes!”

And we still lost 🤦‍♂️

By, the way, in that at bat to Meneses, Kirby followed up his one ball with three more strikes, giving him 27 strikes and one ball thrown in his first 28 pitches. The Mariners’ bullpen ended up losing the game 3-1 after Kirby departed in a 1-1 tie after seven innings.

Also, the record (since records began being kept on it in 1988) for the most most consecutive strikes thrown at any point in a Major League Baseball game belongs to “Big Sexy” Bartolo Colon, who threw 38 straight strikes in a 2012 game.