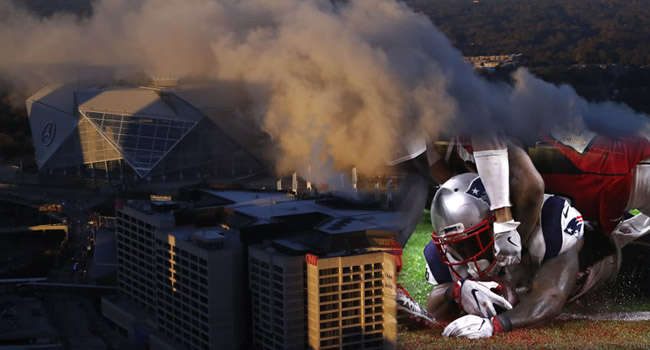 As if Atlanta Falcons fans didn’t have enough to be melancholy about with their once-upon-a-time state-of-the-art stadium the Georgia Dome being blowed to smithereens on Monday, some mad internet genius just went a made it even worse.

Talk about savage. Reddit user tallpaleandwholesome posted a video in r/Patriots (of course) which synced up the Georgia Dome’s implosion to the call of the Patriots’ game-winning TD vs. the Falcons in Super Bowl LI. (His knee still isn’t down, by the way, Falcons fans.)

Then, as if that wasn’t enough salt being rubbed into Falcons’ fans wounds, Patriots fans were very eager to point out that the Georgia Dome met it’s demise exactly 25 years after being constructed. 25… 28-3… Get it?

They also had a lot of fun with the fact that the Falcons were playing the Seahawks on Monday night.

Once and for all we will find out which team that collapsed in the Super Bowl against the Patriots is better. #MondayNightFootball pic.twitter.com/fnqDdzsUOH

Can you imagine the #Falcons memes if we'd managed to collapse in Seattle the same day the Georgia Dome collapsed in Atlanta? 28-3 isn't close to done yet, but that would have been fresh hell for the holidays.

Let's not forget that Charles Manson was a raging racist https://t.co/0inBCyo3Pf pic.twitter.com/q8ciUuE0Bh

Lets not forget that the falcons blew a 28-3 lead https://t.co/YnN8mwCxWM