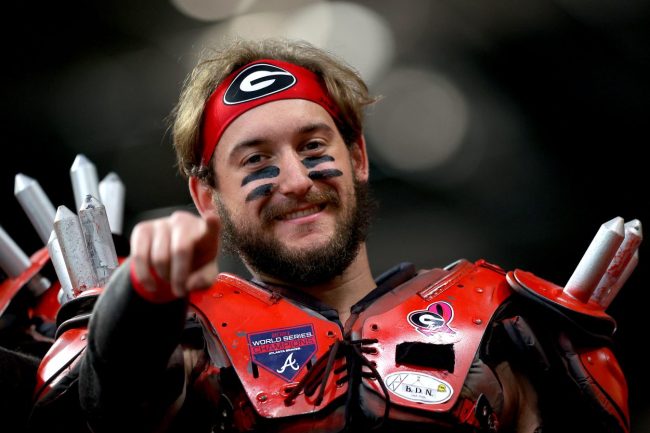 The average high school GPA for admitted students at University of Georgia (UGA) is 4.0 on a 4.0 scale. And yet, somehow, this Bulldog fan does not know the difference between they’re, their and there.

As UGA gears up for the College Football Playoff National Championship on Monday, its fanbase has taken over Indianapolis. Per people on the ground, the split is about 60/40 in favor of the Bulldogs fans outnumbering Crimson Tide fans.

Based on the unruly behavior around town, that notion appears to be true. On Sunday night, Georgia fans had the police called on them for barking like a dog in one of the city’s nicest restaurants. On Tuesday, the fanbase continued to be proud of their drunken obnoxiousness and caused a scene all over town.

As the game got closer to kickoff, the fans started to make their way toward Lucas Oil Stadium for the game. Outside of Punch Bowl Social, two blocks from the stadium, a Georgia fan was spotted with an incredibly embarrassing sign.

It read: “Alabama pays they are players.”

Not only did the fan use the wrong their/they’re/there, but the insult is out-dated. In the age of Name, Image and Likeness, paying players is the norm.