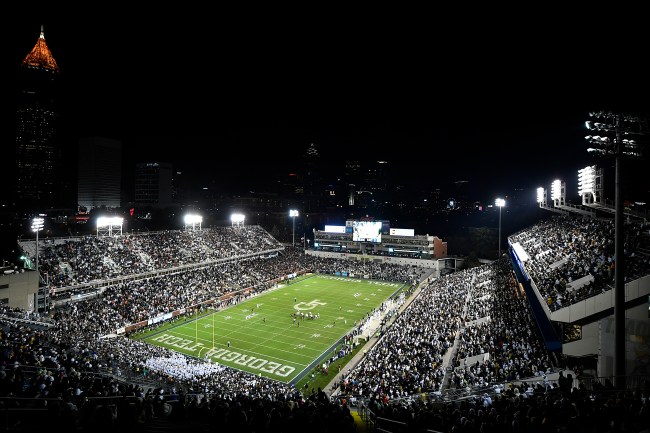 Tragedy struck the Georgia Tech community as 21-year-old defensive lineman Brandon Adams died in Atlanta on Saturday after collapsing near the campus.

Adams was reportedly working out and wasn’t feeling well. He allegedly died from an aneurism en route to the hospital.

The 6-foot-2, 325-pounder played in 33 games over three seasons as a Yellow Jacket from 2016-18, recording 41 career tackles, 6.5 tackles for loss and two forced fumbles. The Brentwood, Tennessee, native was a jack of all-trades in high school–a three-sport star at Brentwood Academy (football, wrestling, track and field). He served as the captain for the football and wrestling teams, leading them both to state championships during his senior year.

Our hearts are broken by the sudden passing of Brandon Adams. He was a tremendous teammate and friend. Our thoughts and prayers are with his family during this difficult time. https://t.co/bNXgnwwu03 pic.twitter.com/LaZlicpnEg

“Our entire Georgia Tech football family is heartbroken by the news of Brandon’s passing. In the short time that I have had the privilege and honor of knowing Brandon, I admired and respected him, first and foremost as a terrific human being, but also as an outstanding teammate and leader. [My wife] Jennifer and I offer our thoughts, prayers and unconditional support to his parents, Lisa and Reginald, his sister, Rian, and all of his family and friends, especially his brothers in our football program.” 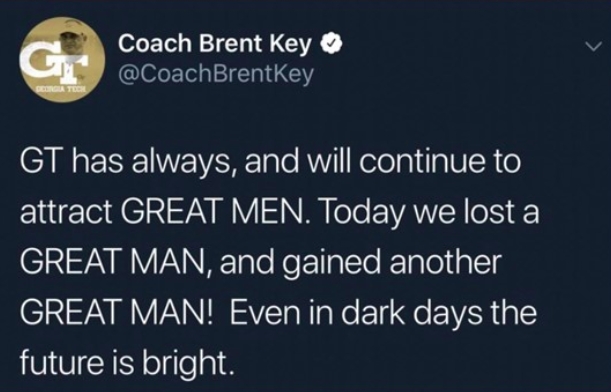 Ending a tribute to someone’s life ending by saying “the future is bright” is either malicious or incredibly stupid, and I’ll give Coach Key the benefit of the doubt and guess this was an uncharacteristic lapse of judgement.

Regardless, Key heard it from all corners of the internet.

I’m devastated by the loss of a great man. I never meant to disrespect Brandon, his family, or the legacy he left. RIP Big B

This is an example of how not to use social media… tying in recruiting to a student-athlete death. Wow. (Tweet has since been deleted, of course.) @CoachBrentKey pic.twitter.com/BL1I2Hbe4I