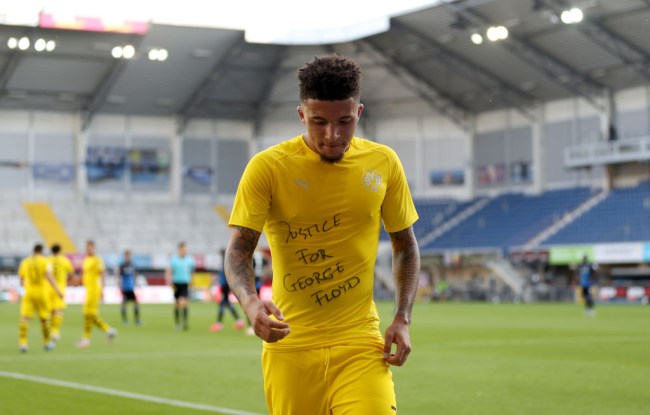 See how easy that was, National Football League? Oh, a bunch of human beings with the platform to spread legitimate messages of change want to speak out against injustice? You know what… that’s a great idea! Not only is it the morally correct, but — on the more cynical corporate side of things — it will give you more airplay across the entire globe! Color me idealistic but that sounds like a win-win for everybody involved, especially when considering the alternative is, well, where we are now. Way to go, Rog!

In case you missed it, tributes to and protests for George Floyd have begun to pop up all over the world — from Toronto to London, from Berlin to Amsterdam and New Zealand. That outpouring of outrage regarding Floyd’s death has obviously bled into the sports world, particularly the German Bundesliga, which is currently one of the only major sports leagues in the world that is, once again, fully operational (without fans, of course).

RELATED: An Ocean Away, The European Soccer World Paid Tribute To George Floyd

During last weekend’s round of games, players on various Bundesliga teams — such as Jadon Sancho and Achraf Hakimi of Borussia Dortmuand, Weston McKennie of Schalke (an American), and Marcus Thuram of Borussia Mönchengladbach — all paid some sort of tribute to George Floyd. As a result, the German FA came out with a statement this week confirming that they will continue to allow the players to carry out such protests.

In a statement, the DFB said it would maintain this stance in the event of further on-pitch protests “in the next few weeks”, paving the way for more activism in the Bundesliga, the only major European football league currently active.

Fifa rules forbid players to display political, religious or personal messages, but the world governing body has urged competition organizers to take a “common sense” approach to the protests and consider the “context” when making decisions. [via Evening Standard]

Sometimes the best way to handle things is to shut the hell up and to get out of the way and let people speak. The NFL made sure they learned that the hard way.