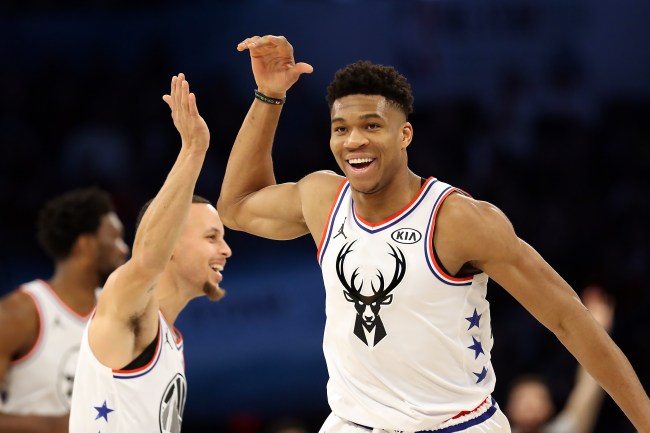 Giannis Antetokounmpo is suddenly being mentioned as the best player in the NBA right now, and for good reason. Not only does the 24-year-old pad the box score with his do-it-all skills, but the guy has taken the Milwaukee Bucks and shaped them into a legit Eastern Conference and, quite possibly, NBA Finals contender. That’s no small task.

Since the man known as the “Greek Freak” can do it all and is on his way to being a top talent in this league, there’s already speculation about where Giannis Antetokounmpo might play next once he becomes a free agent in the summer of 2021. And, given the way one team operates — looking at you, Golden State Warriors — there’s a rumor floating around that Giannis could join forces on the two-time defending NBA champs; should the Dubs lose Kevin Durant in free agency this summer.

That’s according to The Athletic‘s Marcus Thompson II, who had this to write about the rumor that the Warriors would focus their attention on Antetokounmpo in a couple of years because of the sheer star-power surrounding the Bucks forward. Thompson’s argument is, essentially, that after this summer, Giannis would be the next big fish in the NBA’s free agent pool.

“It’s gotta be Giannis now,” wrote Thompson. “After Durant wears the crown this summer, Giannis will be the league’s next huge free-agent target, with his current Milwaukee deal set to expire in July 2021.

Curry, Giannis and Klay Thompson: that’s a viable reset if Durant leaves. It’s possible. It would first require Giannis wanting to play with the Warriors.

Tell me you didn’t get a sense he’d want this from the All-Star festivities.”

OK, sure, that’s just some speculation being tossed out by Thompson just to get pageviews, right? Well, don’t be so quick to judge, because, according to longtime NBA writer Marc Stein, the rumor has some validity. Here’s what Stein wrote in his weekly newsletter for the New York Times, per Yahoo! Sports.

Yet it’s likewise undeniably true that Steph and Giannis are buddies who are both represented by the same agency (Octagon) and share a mutual admiration that has resulted in Curry and Antetokounmpo selecting each other first overall with the No. 1 overall picks as captains in the first two All-Star drafts.

I can promise you, furthermore, that the Warriors have internally mused about a run at Giannis — however futile it may prove to be — in the event they can’t convince Kevin Durant to re-sign this summer. Trying to sign the most attractive free agent available is on the first page of the Golden State owner Joe Lacob’s playbook.

Given the fact the Warriors have made it a tendency to be linked to every single superstar in the league, imagining Giannis Antetokounmpo in the Bay Area come 2021 isn’t as farfetched as some may think. And, as Stein mentioned in his newsletter, given The Greek Freak’s friendship with Stephen Curry — who he shares an agency with — don’t be surprised if we hear serious rumblings come July, 2021 about Antetokounmpo joining the Warriors.

It would take some maneuvering to make it work in terms of salary, but, if this were to happen, it’d just be completely unfair. Seriously, going from Kevin Durant to an even younger, maybe more talented Giannis Antetokounmpo? Please, basketball gods, do not let this happen.