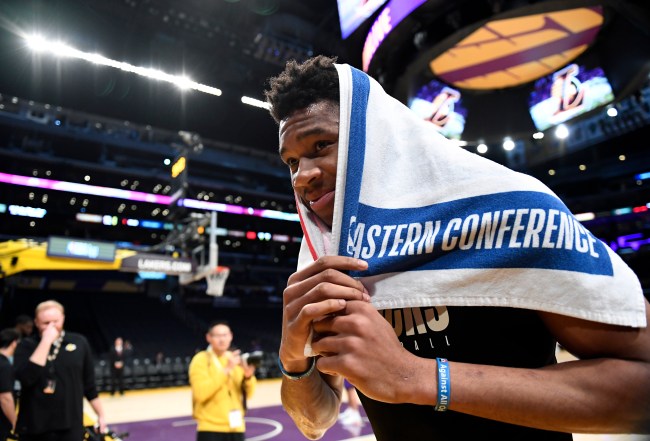 Giannis Antetokounmpo is the two-time reigning NBA MVP, with the Milwaukee Bucks superstar having all eyes on him as he enters this offseason with the potential to re-sign with his current squad. Will he stay? Will he decide to play out his current deal and become a free agent next summer? Nobody really knows, but it’s a situation that will no doubt impact the entire rest of the league.

So, naturally, with Giannis being the big star that he is, the Los Angeles Lakers are linked to him, with the defending champs possibly making a run for him should he become a free agent next summer. While Antetokounmpo says he doesn’t like when superstars team up and be all buddy, buddy, an opportunity to play alongside LeBron James and (most likely) Anthony Davis for a chance at some rings would probably be too much to pass up.

To make it happen would require work by the Lakers’ front office… but, rest assured, it can be done. And ESPN’s Brian Windhorst offered up a strategy that could be going on as we speak in order for the Lakers to re-sign Davis this summer and acquire Giannis Antetokounmpo next summer. Take a look at what the reporter said on SportsCenter on Monday.

Given the fact Giannis has a supermax option on the table right now — worth $228 million over five years — the superstar needs to ask himself if he trusts his own skills and Bucks management to compete for titles in Milwaukee, or if he’s best served joining forces and trying to win a ring with other All-Stars.

Based off of what Windhorst suggests here, the Lakers could be working behind-the-scenes on getting James and/or Davis and/or other players to chirp in the ear of Giannis Antetokounmpo, laying out a plan that sees him getting max money next summer from the Purple & Gold, while the other stars take a little less in order to form an unstoppable superteam. Legit, if these three ever play together, that team could go undefeated all regular season and playoffs. It’s scary to think about.

Sure, this all might be a long shot, but even with a one in 305 million chance, people still win the Powerball jackpot, so crazy things happen. It would take a lot of convincing and maneuvering by the Lakers, but nobody should count out this wild scenario given the power that LeBron James and Anthony Davis possess — especially if the Lakers were to get to the NBA Finals again this upcoming NBA season.

Giannis Antetokounmpo’s brother already plays for the Lakers, so you can bet he’s already giving the sales pitch about what a roster with the league MVP could look like.