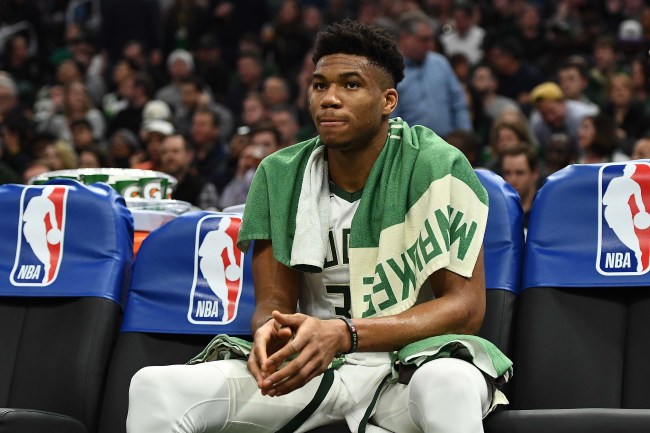 Giannis Antetokounmpo is your likely NBA Most Valuable Player this year, but, unlike some of his peers, the Milwaukee Bucks star doesn’t necessarily take part in promoting himself all that much. While players like LeBron James, James Harden, Russell Westbrook, Kevin Durant and Stephen Curry often own headlines and sports talk radio, “The Greek Freak” typically keeps to himself and minds his own business, almost avoiding the spotlight at all costs. It’s eerily similar to Kawhi Leonard’s approach, which is to say that they’re both superstars who don’t have superstar personalities.

Remember, Giannis Antetokounmpo once said that he “hates the buddy-buddy relationships” that other NBA players have, saying that he doesn’t want to help an opponent see any of his tricks that he’s working on privately. Call me old school, but Giannis is right in his approach, because seeing guys like James and Durant secretly whisper to one another during games that their teams are playing in just seems wrong. Whatever happened to good ol’ fashioned trash-talk?

Anyway, speaking of LeBron James, it’s been rumored that the Los Angeles Lakers star has had problems recruiting other NBA stars to join him to film Space Jam 2 this summer. One of those players? Giannis Antetokounmpo, who, according to an in-depth piece from ESPN’s Malika Andrews, didn’t want any part of being cast in the film because he has a strict training regime during the summer and, to be frank and in his own words, he doesn’t “like being Hollywood.” Here’s a snippet from that ESPN article talking about Antetokounmpo’s obsession with his training, as well as why he turned down the Space Jam 2 offer.

Antetokounmpo’s tendency to scrupulously script his day and control his own development bleeds into the offseason. While he says he approaches his summer with 50 percent of the intensity he has from October to June, close friends dispute that calculation. They estimate he dials it back only 10 percent in July and point out that he has toted a notebook to summer meetings with Kobe Bryant to track his next round of adjustments.

Antetokounmpo does make summer modifications to accommodate for relaxation and family time. Still, when approached about starring in “Space Jam 2” with LeBron James, Antetokounmpo declined. Being in the film would have required him to give up two weeks of private workouts to train with his fellow stars while making the movie, a total non-starter, given Antetokounmpo’s reclusive tendencies.

“I don’t like being Hollywood,” Antetokounmpo says. “I don’t like all this extra drama. I am just going to try to be me.”

The entire ESPN piece really sheds a light on Giannis Antetokounmpo’s obsessive training habits and competitiveness, outlining his passion to get better at every aspect in his game. His head coach, Mike Budenholzer, said that he’s had to lock the gym up to keep Giannis from going in to shoot in order to keep him fresh and to avoid wearing down throughout the season. Teammate Khris Middleton agreed, describing Giannis’ routine prior to games as being “over the top,” adding, “His routine is over the top. I know where he is going to be every second before the game. When you see him not doing that, you realize something is wrong.”

Sure, Giannis Antetokounmpo might be turning down the chance to become a top-flight star in the sports marketing world by turning down offers like Space Jam 2 and networking with other stars about opportunities that could lead to more money, but he’s staying true to himself to better his game, and that’s awesome. Given the fact he plays in a small market like Milwaukee, led that team to 60 wins and the top-seed in the Eastern Conference, and has his own signature Nike shoe being released during this year’s NBA Playoffs, it’s safe to say Giannis is doing just fine in his approach by letting his hoops game speak for itself without all the other distractions other NBA superstars might have.