Giannis Antetokounmpo Pulled A Vince Carter By Jumping Over Tim Hardaway Jr. For A Dunk 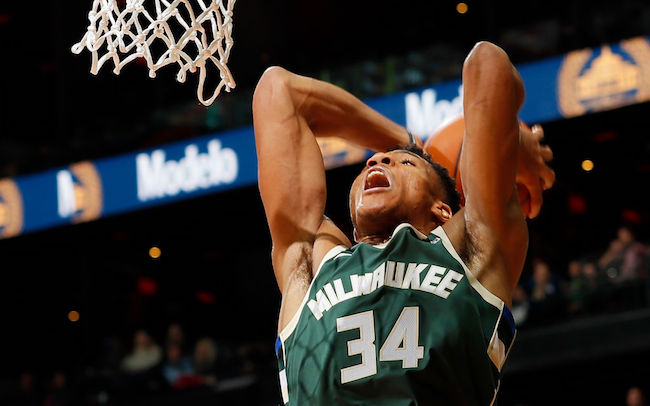 Over the course of his 14 years in the NBA, Tim “No Relation To Penny” Hardaway was named to the All-Star Team five different times, won a gold medal at the Olympics, and ultimately had his number retired by the Miami Heat. Last night, his entire legacy was almost erased through no fault of his own (besides deciding to father a child) when his son was on the receiving end of one of the most vicious dunks you’ll ever see.

During Tuesday night’s game against the Milwaukee Bucks, Tim Hardaway Jr. found himself as the only Knick in a position to defend a fast break led by Khris Middleton, who was being trailed by Extremely Gifted Human Being Giannis Antetokounmpo. Middleton lobbed a pass in the direction of the Greek Freek, who proceeded to throw down an alley-oop dunk that likely made Hardaway question his decision to ever play basketball in the first place.

Here’s a picture of the poster that is just begging to be made.

Antetokounmpo follows in the footsteps of a DII player who channeled his inner Vince Carter last month. The Bucks forward was asked about the dunk after the game, and he claims he didn’t even realize what he’d done at the time.

Asked Giannis about his dunk over Tim Hardaway Jr. tonight and he had some fun with it. Smiled as he said Khris Middleton's pass wasn't a good one and that he didn't see Hardaway. Then I asked what the response has been so far. Here are his answers to both questions: pic.twitter.com/qlnahMm3hw

Unfortunately for the Knicks, this was far from the most demoralizing thing to happen to the team during the game, as Kristaps Porzingis tore his ACL earlier in the contest. I can’t help but wonder which player will take more time to recover.