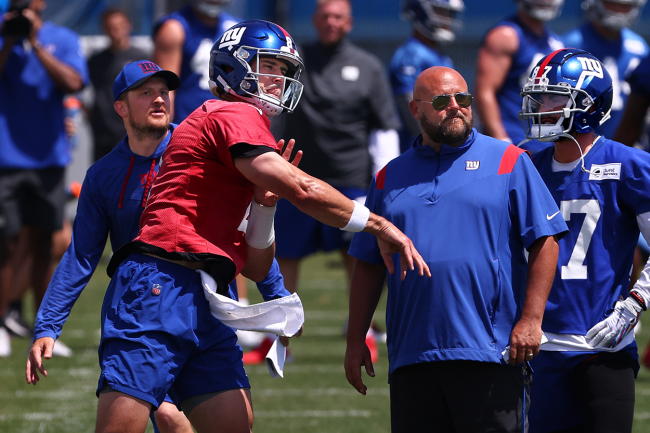 Brian Daboll is considered one of the best offensive minds in football. As he takes over a floundering Giants organization, New York’s offense is going to look completely different and his wide receiver group is excited.

After beginning his career on the defensive side of the ball, Daboll took over as the Patriots’ wide receivers coach in 2002. From there, he spent time as a quarterbacks coach with the Jets, and the offensive coordinator with the Browns, Dolphins, Chiefs and Alabama Crimson Tide. Most recently, the 47-year-old spent the last three years as the offensive coordinator with the Bills.

Under his watch, quarterback Josh Allen blossomed into a superstar and Buffalo’s offense became one of the most dynamic in the league. Now he will look to bring that excitement to an offense that finished second-to-last in 2021.

And it sounds like he is well on his way.

Seven-year veteran wide receiver Sterling Shepard has spent his entire career with the Giants. He has seen three offensive coordinators and three head coaches come through New York during his time in the league.

Serling Shepard is impressed with what Brian Daboll and new offensive coordinator Mike Kaftka are bringing to the New York Giants.

He recently discussed the new-look offense on an episode of the Giants Huddle podcast and said pre-snap commotion is key.

Daboll and Kafta have both used pre-snap motion and movement to get a jump on the defense. It’s supposed to leave their opponents confused and unprepared, two things that have paid off in their previous stops.

“It’s good because you get a man-zone read,” Shepard said. “[That’s] the number one thing, and this offense is all about playing fast, so anything that you can catch an inch on with what the defense is about to do is good. That’s what the motions are really for, getting those man-zone reads.”

Rookie pass-catcher Wan’Dale Robinson is also excited about what the motion creates once the ball is snapped.

“It just allows you to get a lot more one-on-ones and get a lot of space,” he said on the podcast. “Create mismatches for the defense. They have to communicate and things like that. Whenever you’re moving and playing fast, defenses can’t communicate, and you get a lot of big plays out of that.”

As for how Shepard thinks the changes will translate, there is a lot of hope. The Giants finished last in plays of 20-plus yards in 2021, and he thinks  that will change this fall.

“It has potential for a lot of big plays, and it has some fancy plays in there as well,” Shepard said. “I think the fans will love it. We’ve just to keep doing our part and putting in work.”

It will be interesting to see how the new install translates to success in year one. Saquon Barkley looks healthy (and JACKED), and he is also taking on a new role with the team.