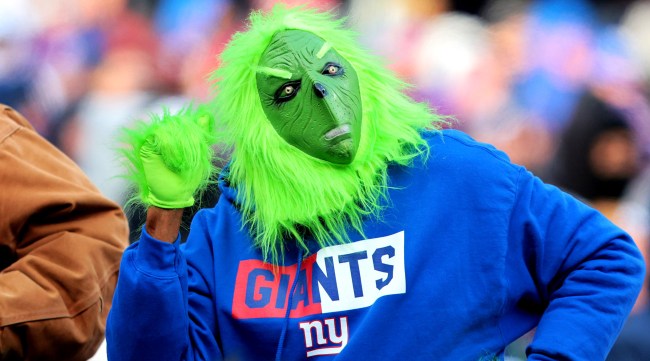 The New York Giants, now 4-10 after Sunday’s loss to the Dallas Cowboys, thought it would be nice this holiday season to hold a Fan Appreciation Day this past weekend.

And it would have been, considering fans are paying the ninth highest ticket prices in the NFL for a team that is in last place in the NFC East and has only one winning season since 2012.

Except, the big Fan Appreciation Day giveaway was going to be a medium Pepsi. That’s right. A medium Pepsi. Season tickets cost anywhere from $1,000 to $20,000 and the Giants couldn’t even spring for each fan in attendance to get a large soft drink.

Needless to say, once this news spread on the internet the Giants got absolutely torched for their cheapness.

But wait… it somehow got worse.

On Sunday, fans at the Giants game were met with another surprise, and it wasn’t the good kind.

Someone just told me that the free Pepsi at MetLife today is not one drink per ticket. It’s only for the person whose name is on the account

So, if, say, a family of four had season tickets that were all purchased under one name (which would certainly be expected), that family received ONE MEDIUM PEPSI as thanks on the Giants’ Fan Appreciation Day.

A New York Giants tweet. My family is at the game.

One free medium soda PER SEASON TICKET HOLDER ACCOUNT (!!!) Not even one per season ticket.

Assuming that family of four bought the cheapest season ticket plan, they would have given the New York Giants $4,000 before even setting foot inside the stadium. The more typical price is $7,500 per ticket, which would add up to $30,000, making the Giants measly Fan Appreciation giveaway even more pathetic.

I got mine. PS it doesn’t matter how many Season Tix you pay for. You only get 1. WTF??? pic.twitter.com/hYfhpCgJCq

Perhaps if the Giants had beaten the Cowboys fans would be more willing to let such a terrible idea slide, but, they didn’t. So…

@Giants organization just alienating fans at this point with their medium Pepsi giveaway. Not large: no no no, That’s to expensive. Gotta be a medium. Then they say it’s for season ticket holders, then change it as they arrive to @MetLifeStadium to season ticket ACCOUNT holders.

The losing doesn’t even bother me it’s the lack of respect for the fans. Other teams do so much for their STH the Giants do absolutely nothing and then you think your getting 4 Pepsi’s for 4 seats $140x4 for $560 plus parking and they say one per family here’s 4 straws share it

Thanks for the one medium Pepsi you chicken hawks! The PSLs you charged are worthless and you thank us with a single medium pepsi? This organization is trash, no class!

My favorite part of this is that each season ticket account got ONE Pepsi. So if you have four tickets under one account, you got one Pepsi to share between the four of you. My god what a tone deaf promotion. Clown. Show.

Frank Oliver, known around the Giants fan base as “The Worm,” tells the @Giants what he thought of the free medium Pepsi as part of “Fan Appreciation Day.” pic.twitter.com/4B0WzmMJqv