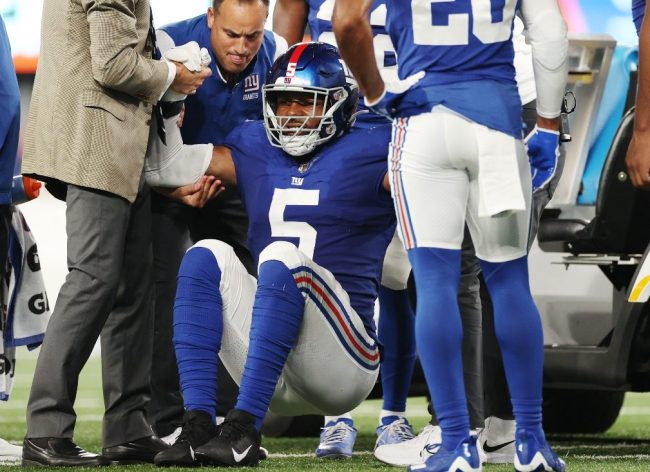 The New York Giants had a rough go in their latest preseason matchup against the Cincinnati Bengals. They were able to walk away with a win, however, the organization suffered a potentially huge loss. Kayvon Thibodeaux fell to injury and it has sparked reactions throughout the league. Now, the Giants head coach Brian Daboll weighs in on the controversial injury.

According to Ari Meirov, Brian Daboll put most of his attention on the NFL rulebook when asked if Kayvon Thibodeaux suffered an injury due to a dirty play. Fans across the league have shared their opinions on the injury and many are not happy. The Giants need Thibodeaux if they hope to compete in the NFC East. However, the rulebook does allow these types of blocks.

#Giants HC Brian Daboll on if the Kayvon Thibodeaux injury was a dirty play: “Well that's the rules. We do it as well with TEs and FBs going back to the line of scrimmage. So got to do a good job of playing it. It's a tough block. But whatever the rules are, those are the rules.”

This is actually a smart answer from Daboll. Rather than calling out the Bengals and generating drama, the Giants head coach emphasizes the rulebook. Perhaps the league will make some changes down the road, as these types of blocks are completely unnecessary. Especially considering it happened during a meaningless preseason game.

Luckily, the injury isn’t too serious as it appears the Giants dodged a bullet, per Addam Schefter. Kayvon Thibodeaux is only going to miss three to four weeks with an MCL sprain. New York shouldn’t rush their rookie prospect back onto the field and instead give him all of the time he needs to get healthy.

Initial tests revealed that Giants’ DE Kayvon Thibodeaux suffered a sprained MCL that is expected to sideline him 3-4 weeks, per source. His ACL and meniscus were intact.

Giants are still hopeful that he will be ready for the regular-season opener vs. the Titans, per source.

We’ll see what happens though. Fans clearly want a change in the rulebook as many believe the play was dirty, despite the injury not being serious. Even so, Brian Daboll makes a fair point that the play does in fact follow the rules. Injuries happen all of the time, but if the league can cut down on blocking techniques like the one we saw in the Giants preseason game, then changes should be made.