Fight Breaks Out At Giants/Patriots Joint Practice Over Nothing, Lineman Offers Hilarious Reason 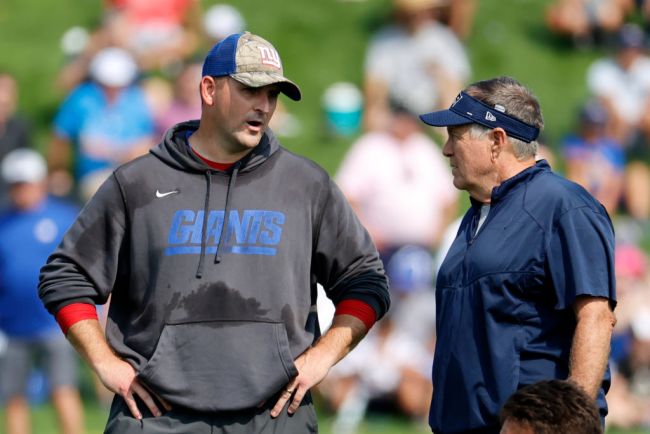 Both temperatures and tempers were running high in Massachusetts during Wednesday’s joint practice between the New York Giants and New England Patriots. About an hour into the session, a pair of fights broke out amongst the trench warriors.

Things got started during a rep between Pats guard Mike Onwenu and Giants defensive tackle Dexter Lawrence. Lawrence checks in at 6-foot-4, 342 pounds and Onwenu measurs 6-foot-3, 250 pounds, so there was a lot of weight being thrown around.

As the two went at it, the kerfuffle quickly grew to involve the rest of the lines for both teams. It led to a massive dogpile between the two groups and a lot of beef was being thrown around— both metaphorically and physically.

You can see here the huge pig pile from both teams as a fight broke out between the Patriots and Giants today at joint practice. pic.twitter.com/sD6va9Mbto

It is unclear why the scrum went down, but apparently Daniel Jones can see the future.

New England big ugly David Andrews offered a tremendous backstory. He joked that the two sides were just talking some baseball when things got chippy.

David Andrews with a great answer for what caused the small fight between some of the Patriots OL and Giants DL at practice earlier 😂 pic.twitter.com/z5OpICOx5q

Both teams have very traditional head coaches at the helm. Bill Belichick has long been known for his “by-the-book” approach to football and Joe Judge is quickly developing a rapport as an old-school “football guy.”

As such, neither coach was having it. After the skirmish was separated, both sides had to run a lap.

#Patriots OL vs #Giants DL 1-on-1s. There is a scrum. Bill Belichick and Joe Judge come over and make their guys run a lap.

The Patriots offensive line ran first and Belichick even made O-Line coach Carmen Bricillo join his position group on the lap. Quarterback Mac Jones also ran with the group that protects him.

Once the Patriots had finished, Judge sent his entire defensive line on a lap.

Two fights so far. One mini scuffle between Will Hernandez and a Patriots DL. And one bigger one between the Giants EDGE rushers and the Pats OL. All players running a lap now. pic.twitter.com/cIRwXeMlXO

Nobody from either side got the boot from practice over the fight.

New England and New York will practice again on Thursday before squaring off in Sunday night’s preseason finale.