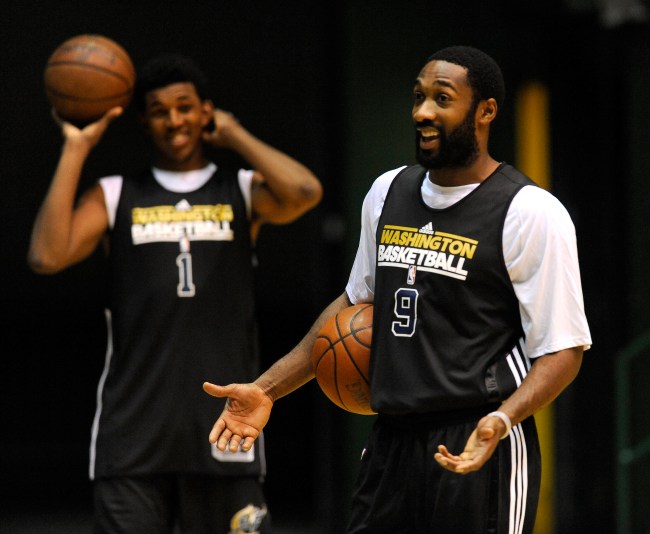 Gilbert Arenas is an absolute savage, and, because of that, the former NBA All-Star knows that everybody will listen to his wild stories anytime he opens his mouth. Remember, this is the same guy who once pulled a gun on a teammate during a card game in the locker room while with playing with the Washington Wizards, so if it seems like Arenas is a little more colorful than your normal person, it’s because he is.

While there have been some tremendously entertaining Gilbert Arenas stories over the years, the ones that involve one of his former teammates, Nick Young, always seem to be the best. Young, who came into the league after three seasons at USC, was one of Arenas’ running mates in D.C. — and Gil always made sure he was hazing the fuck out of the kid.

Over the years, we’ve heard rumors about a Gilbert Arenas-Nick Young feud, but who knows if that’s legit or not, as it seems more like a bigger brother-little brother kind of scenario. Still, the fact that Arenas once rubbed Young’s $1,000 sunglasses on his nutsack (but did replace them), and once shot Young with a BB gun during a meeting about firearm safety, proves just how weird their relationship is.

Well, things just got a little bit weirder, because, while talking to SLAM magazine recently, Arenas told a story about how he used to sleep with Nick Young’s thots (otherwise known as “cheap girls”), to prove a point. In Arenas’ words, Young would “fall in love” with these ladies, and, to teach his young teammate a lesson, Gil would bed them. The only women off-limits? The ladies Young actually called his girlfriend — like Iggy Azalea. Take a look below at the admission from Gilbert Arenas.

OK, so, if this is true, it’s kind of messed up; but also kind of genius of Gilbert Arenas. Sure, he was scooping in on Nick Young’s one-night stands, but he was kind of doing the young guard a favor — I mean, the kid had to learn not to fall in love with a jersey chaser, right? And if Arenas obeyed the rule of never going after an actual girlfriend of Young’s, it’s kind of fair game.

I could listen to Arenas tell stories for days, and if they include how he would torture and fuck with Nick Young during their days together on the Wizards, even better. Who knows if these two actually dislike one another, or if it’s all just part of their schtick as buddies (and are just constantly busting each other’s balls), but, regardless, I’m always here for it.