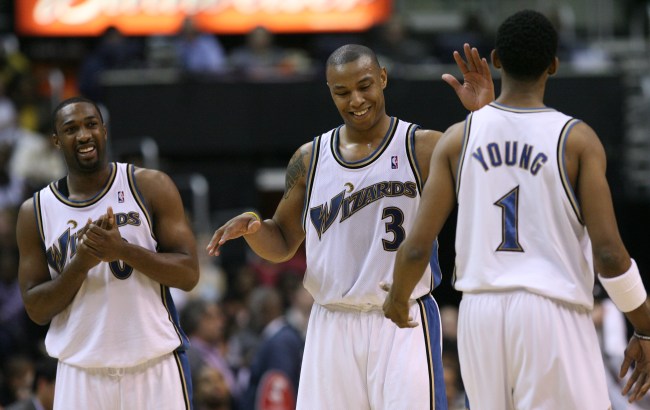 Gilbert Arenas and Nick Young were two peas in a pod while both were playing for the Washington Wizards. Arenas, who at the time was a bonafide superstar and All-Star, seemed to act like the older brother to the energetic and charismatic Young, who perfectly played the role of the younger brother. Unfortunately, that wasn’t the best scenario when it came to creating a winning culture and encouraging discipline.

After most of us watched ESPN’s The Last Dance — the documentary about Michael Jordan and his Chicago Bulls — it taught us that MJ took his job as a leader responsibly. He pushed his teammates to boundaries they weren’t comfortable with. He held them accountable. In Gilbert Arenas’ situation with Young, that wasn’t exactly the case.

Routinely goofing around, Arenas picked on Young in a playful manner, but it wasn’t in a way that made him a better basketball player. And that kind of joking led to the Wizards underperforming with a roster that was talented AF; which is something Arenas recently chatted about as a guest on the Opinionated 7-Footers‘ podcast, specifically talking about how Young — and some of his other younger teammates — seemed to shadow the former talented scorer.

“I could see all the raw talent [Young] had. Put some work ethic into it and, man, this could be a nice little backcourt. So, from there I’m taking him under my wing. But the problem with that, with under my wing at that point in my career, I’m hurt and I get hurt again. So, I’m not the person I was when I was healthy; in the gym 24-7. Now it’s Hangout Gil. So, now Hangout Gil is with rook. The rookies are hanging out with Hangout Gil. It’s not the determined, ‘let’s get better, let’s prepare.’ If I’m going on the road, I don’t have to play. I’m going to go to the club. Rookie wanted to go with me. So, he became my sidekick in that sense, which was unfair to him at that moment.

“With the young guys, they picked up more on my off-the-court behavior rather than my on-court behavior. So, I kind of messed up the little group; the Andray Blatche, JaVale McGee and [Nick Young].”

“We’ll be eating and when he’s finished, he would lick his fingers and put his hand in your food so that you’re finished, too. So, that’s what I was also dealing with,” Arenas said.

Unlike Jordan did, Gilbert Arenas didn’t exactly set a great example for the younger fellas. As the leader of those Washington teams, any young player would’ve naturally picked up on his habits — which didn’t seem to be the best when he was injured. This is something that one of the hosts of the Opinionated 7-Footers‘ podcast, Brendan Haywood, pointed out. Haywood played with Arenas and Young in Washington, and explained how the dysfunction in the locker room led to Nick Young getting his “Swaggy P” nickname.

“So, that is how Swaggy P became Swaggy P,” Haywood said.

The BB gun fight is something that’s pretty well documented, and was something Gilbert Arenas seemed to enjoy more than he probably should’ve; especially as the team leader and the most talented player. But, through all the mayhem came the nickname “Swaggy P” for Nick Young, so here’s to hoping those boys enjoyed the wild ride together.