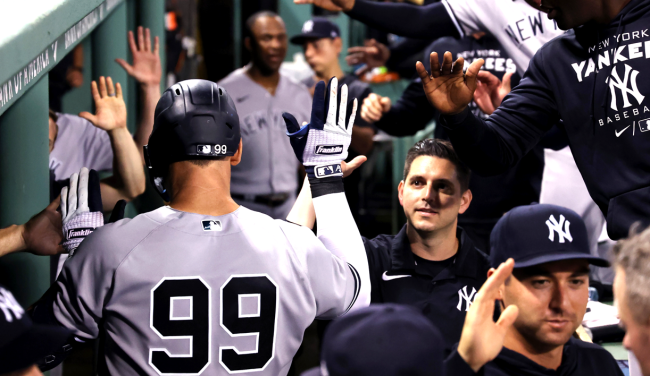 Imagine for a moment, you’re 18 years-old, your uncle has tickets for front row seats right next to the Yankees dugout at Fenway Park for a Red Sox game versus New York.

During the game, Aaron Judge not only hits home run number 56, but also number 57.

Then, after The Judge hits his second bomb of the night, as he is making his way back into the dugout, he turns and gives a high-five to the person sitting in one of your uncle’s seats.

But you didn’t go to the game.

That’s exactly what happened to the brother of Cecilia Jacob’s friend on Tuesday night.

Luckily for Cecilia, instead of 18-year-old Teddy sitting in that seat at Fenway, she was there with her 20-year-old friend Lucy Nuttall. The tickets actually belonged to Lucy’s uncle Bill, who had promised to take Lucy and Teddy to a game, but he didn’t go.

“You see him come up to take the high-five,” Cecilia told The Athletic about her viral moment. “But when he goes to actually hit the high five, you don’t (see) it. But then you catch my hand after, like shaking, frozen in the air, because my hand stayed there for like five seconds after because I was in disbelief.”

After the game, Judge said he’s trying not to get too caught up in the home run record chase.

Aaron Judge: If you're checking the numbers, you're going to get caught so I just keep trying to do what I can do and the numbers will take care of itself. pic.twitter.com/J5WE1G9Oxv

With that 57th home run Tuesday night, Judge now has 20 more home runs than the next batter on this year’s home run list: Kyle Schwarber with 37. Only Babe Ruth (in the 1920s) has ended a season with that sort of lead over second place on the league’s home run list.

He now sits just one home run away from the record for most home runs in a season by a right-handed batter in the American League, 58, by Jimmie Foxx in 1932 and Hank Greenberg in 1938, and four away from tying Roger Maris’ American League record of 61.