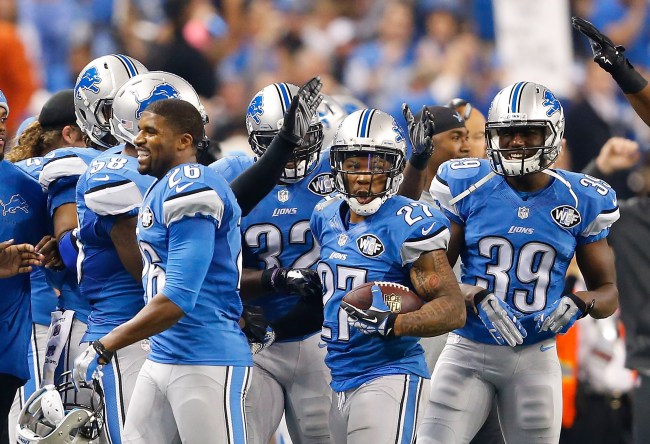 Detroit Lions safety Glover Quin never made a TMZ headline for partying on a yacht in Ibiza. He never commissioned Gabriel The Jeweler to create gaudy pieces of customized jewelry. To my knowledge, he never even made it rain at a strip club. What a cheapskate!!

In a league where fiscal irresponsibility often enhances personal branding, the former Pro Bowler never succumbed to the trap.

The 33-year-old recently announced his retirement after playing 10 great seasons in the NFL, and sat down with Peter King for this week’s Football Morning in America to talk about how his frugal living has allowed him to accumulate a hefty nest egg for his post-football days.

He ranks 2nd in career tackles by a Lions DB (423) and leads all safeties in Lions history with 19 INTs. pic.twitter.com/Uu1y5TY3JJ

Quin told King that he’s saved 70 percent of his after-tax income. He made more than $33 million in his 10 seasons in the league.

“That was all a part of the plan,” Quin said. “I never had a Bentley. I never had a Maserati. My wife and I lived well. We just didn’t live extravagantly. My attitude was, if you sacrifice a little bit in your twenties, you can live great for the rest of your life. And by doing that, I could walk away without thinking right now, ‘I gotta play one more year because I really need that extra $2 million.’”

It’s pretty wild to juxtapose Quin to someone like Vince Young, who reportedly spent $5,000 a week at the Cheesecake Factory and bought every ticket on a Southwest Airlines flight just to have some peace and quiet. Suffice it to say, Young eventually went broke and then took out a $300,000 loan to throw himself a birthday party. We are the choices we make.