The Warriors Are Still Going To Win The NBA Title This Year, So Stop Trying To Tell Yourself Otherwise 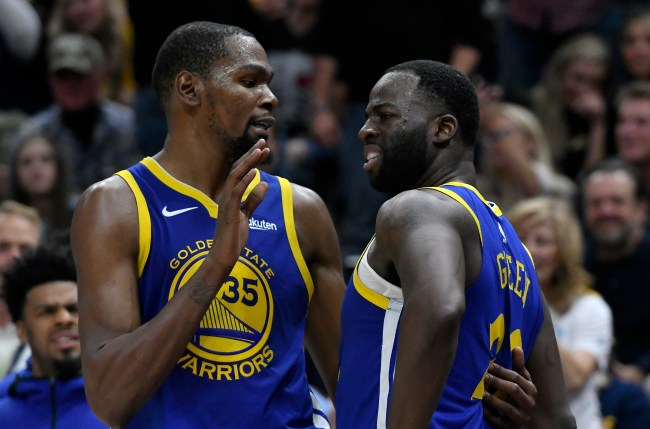 The Golden State Warriors might be in a current state of flux following the argument and dysfunction between both Draymond Green and Kevin Durant — which led to Green being suspended and fined for last night’s game against the Atlanta Hawks and some cryptic messages from Durant’s brother on social media. Thing is, it’s time to stop trying to lie to yourselves about what this little fight, in the middle of November, means in the long run, because the Warriors are still winning this year’s NBA title — so just go ahead and book it now.

The Draymond Green one game team suspension will cost the forward $120,480. This is a team issued suspension and the Warriors will not receive a luxury tax credit.

As a Cleveland Cavs fan, I absolutely despise the Golden State Warriors. Let’s face it, that’s kind of expected after watching the Dubs win three of four NBA Finals’ matchups since 2015, so it’s not as if my declaration that they’re winning the title this season is because I’m a fan of theirs. In many ways, it’s actually the exact opposite, because I’ve seen this team overcome every single obstacle since they added Kevin Durant in the summer of 2016, and they’ve got a bunch of future Hall of Famers that won’t allow them to fail.

In 2016, prior to Golden State coming back from down 3-1 in the Western Conference Finals to the then Durant-led Oklahoma City Thunder, I wrote them off, telling myself they really weren’t that great. All they did was win that series in seven games and narrowly missed another championship. Literally, it took a Green suspension in Game 5 and a Herculean block from LeBron James in Game 7 of the NBA Finals for the Warriors to lose.

In 2017, after the team added Durant following the Finals loss to the Cavs, I was convinced the Golden State Warriors were going to be bitten by the basketball gods, with the team having to overcome injuries or some unforeseen disruption that would cost them a title. By the end of the season, though? Well, you know how the story went: Warriors, champs in five games.

In 2018, I actually thought the power of positivity would work and my best friend and I spent nearly two hours on the phone going through all the circumstances in which the Warriors would lose to the Cavs, which would lead to LeBron James re-upping and staying in Cleveland. James did his part in Game 1, the rest of the team, well… JR Smith. I’ll leave you with that.

This season will be no different for the Warriors, even with all this drama surrounding Kevin Durant and Draymond Green. Why? Because they’re champions. Because they’ve demanded and received the spotlight since Durant signed with them in 2016, ending each season with a title. Because brothers fight, and it toughens them up in the long run.

Here's how the Draymond Green saga ends: The Warriors will trade him either mid-season or right afterwards if they think it'll get Kevin Durant to stay as a free agent. They may just trade him regardless…

As for any rumors about Golden State thinking about trading Draymond Green? Well, forget about that, it ain’t happening. The team’s president of basketball operations, Bob Myers, is too smart to do something like that. He knows he needs Green’s toughness. Myers knows that, as malcontent as the All-Star can be, he brings an edge that does more good than bad — even if it costs him a regular season game and $120,000. Myers knows that, to win another title and stay hungry, the Warriors need Green.

As sports fans, we like drama. We welcome it. It’s one of the reasons why we play hooky from work to go to games, or why we watch two hours of shows on ESPN where talking heads argue about the same topics. But, let’s get this straight, the Golden State Warriors are winning the NBA title once again this year, so don’t try to convince yourself otherwise.