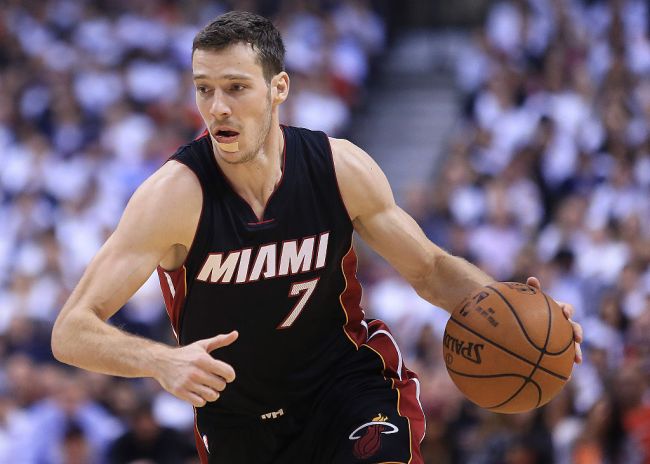 “Toronto is not my preferred destination. I have higher ambitions. We’ll see.”

At 35 years old, Goran Dragic doesn’t have time for pleasantries. This is why in an interview with a Slovenian TV outlet Dragic treated a Toronto Raptors organization like a local YMCA squad.

Dragič on his future: "Toronto is not my preffered destination. I have higher ambitions. We'll see." @townbrad pic.twitter.com/U3WCSL1Oug

To add insult to injury, Dragic is wearing a Heat Culture shirt days after being traded from Miami to Toronto. Simply unprecedented.

The Raptors acquired the 1x All-Star point guard from Miami in a sign-and-trade for Kyle Lowry in an effort to round out a team hopeful to make the playoffs with Pascal Siakam, Scottie Barnes, Fred VanVleet, and OG Anunoby after finishing a dismal 12th in the Eastern Conference a season ago.

The squad as it stands now is not built for title contention, which is the biggest glaring void in the Dragic’s 13-year NBA career.

Toronto Sportsnet reporter Michael Grange spoke with Dragić, who apologized and claimed his words came out harshly, but refused to make a stern commitment to the team who traded for him.

I just spoke with former Miami Heat and (for now) Toronto Raptors guard Goran Dragic about his comments on Slovenian TV. He is one of the most respected vets in the NBA, and clearly feels terribly about how things have come across. Story coming soon for @Sportsnet: pic.twitter.com/gNa0u5gR31

“My message basically, to all Toronto fans, is: I would like to apologize. It didn’t come out the right way. I know they love their team, and they should be proud, it is one of the best organizations in the NBA. They’ve already won a championship and I didn’t, so what I said, it really was not appropriate.

I love basketball. I love to play and I’m going to give 100 percent wherever I play. Right now I’m [with] Toronto and that’s my main thing to think about.”

Sources told AP that if the Raptors buy out Dragic, he would “obviously” have interest in joining Luka Doncic and Igor Koskosov in Dallas.

In the age of player empowerment, Dragic will almost certainly not be with the Toronto Raptors next season.

Not Goran Dragic: "Hi, Adam. I think the Heat may have tampered on Kyle Lowry." pic.twitter.com/zx9B6mawly

How are you feeling after being traded to Toronto?