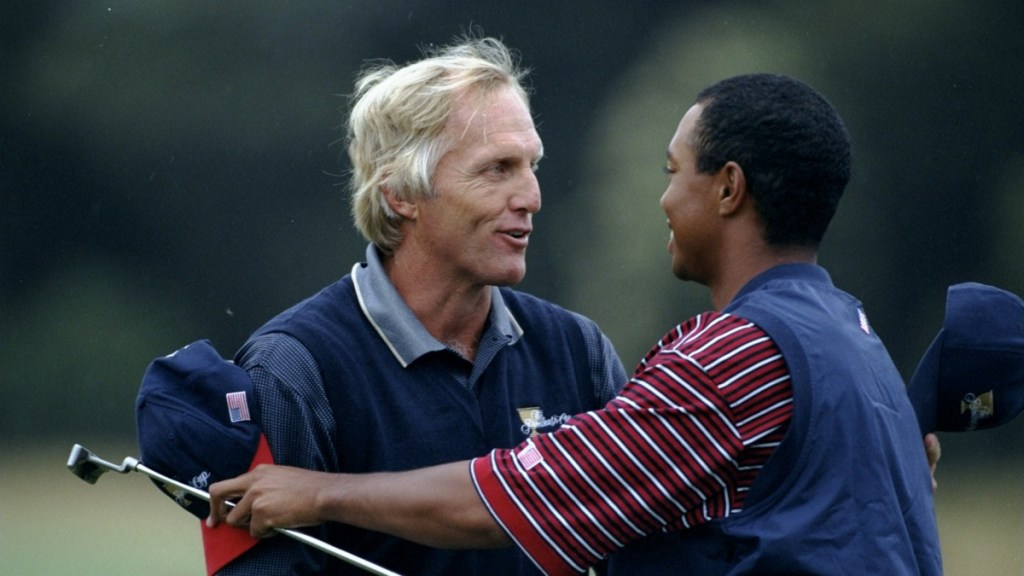 The 2022 President’s Cup tees off on Thursday with the United States holding a major edge over the International team, at least in terms of world rankings. This will be the 14th edition of the President’s Cup and the first time the competition will be held at Quail Hollow Club in Charlotte, North Carolina.

Rosters for the 2022 President’s Cup have been shuffled in recent days due to some of golf’s biggest stars leaving the PGA and DP World Tours for Greg Norman’s Saudi-backed LIV Golf Tour. And just a few hours after meeting with members of the Republican Study Committee (RSC) on Capitol Hill, a meeting that reportedly went horribly for the LIV CEO, Greg Norman is choosing to take the high road while his golfers are sidelined.

LIV Golf CEO Greg Norman posted a picture from the 1998 President’s Cup in Melbourne, an event the International Team won. The caption reads “Outside of all this angst – golf is golf, competition is competition; something every golfer thrives on. As a former player and Captain of the International Team, I wish @trevorimmelman and his entire team the very best in repeating our only 1998 success in Melbourne.”

Why aren’t LIV golfers participating in the President’s Cup?

To be clear, it wouldn’t make any sense at all for golfers on the LIV Golf Tour to participate in the President’s Cup. It is an event organized by the PGA Tour that brings together the best golfers from the PGA Tour and European Tour (DP World Tour). Golfers on the LIV Tour aren’t members of either the PGA or European Tours so they aren’t eligible to participate. End of discussion.

Greg Norman himself participated in 3 President’s Cups (1996, 1998, and 2000). He had a winning percentage of 53.57% in those President’s Cups and was later named Captain of the International Team for the 2009 and 2011 President’s Cups. The United States team won both of those.

The United States team are heavy favorites to win the 2022 President’s Cup:

What happened with Greg Norman on Capitol Hill this week?

Greg Norman was in Washington D.C. this week in a lobbying effort ahead of the Justice Department’s investigation into the PGA Tour. He met with the Republican Studying Committee (RSC) for a lunch meeting.

If the reports being shared from Capitol Hill are any indication, Greg Norman’s lobbying efforts on behalf of LIV Golf and ipso facto, the Saudis, didn’t go well at all… Reporter Emily Hill tweeted:

Rep. Tim Burchett (R-Tenn.) just walked out of the RSC’s lunch with Greg Norman, calling his LIV pitch “propaganda” and saying he had a hard time understanding Norman’s (Australian) accent.

He said RSC shouldn’t be spending its time on “billionaire oil guys” and the Saudis.

Weren’t Saudis flying some of those planes on 9-11 and what about their killing of @washingtonpost columnist #JamalKashoggi? https://t.co/r62JorqKR6

The fact that LIV Golf players were barred from participating in the President’s Cup after forfeiting their PGA and European Tour cards, and getting crushed on Capitol Hill this week, certainly didn’t appear to dampen Greg Norman’s mood. It’s nice to see him cheering on the International Team and trying to fix the divide he is most responsible for creating in golf.

And not for nothing, this Team USA President’s Cup hype video from Justin Thomas is incredible:

USA by a hundred.