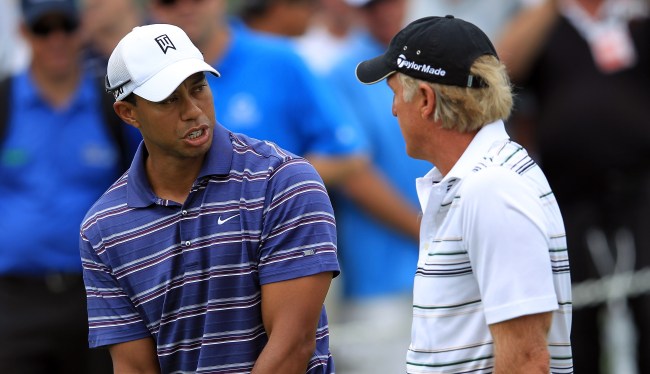 Greg Norman is one of the most recognizable PGA golfers on the planet. Winning two major titles, along with reaching world No. 1 status for 331 weeks at one point in his career, the man known as “The Shark” has earned the respect of his peers after decades on the PGA Tour. Well, it would seem so, although Tiger Woods may not be in agreement.

Without starting a feud that may or may not exist between Woods and Greg Norman, a recent example between the two golfers kind of shows that some tension’s already there.

That’s because, according to Norman, he delivered a handwritten congratulatory letter directly to Tiger Woods’ house months ago following Tiger’s stunning Masters victory, which was praised by everyone in the sports world as being one of the most remarkable comebacks in sports, and never heard a peep back from Woods. Speaking to Men’s Health recently about his insane fitness routine, Greg Norman was asked about Woods’ snub, and offered up his side of the story.

“Yeah, look, I’m happy to clear that up for you. Like, when you ask me a question, I’m going to give you an honest answer. I’m not going to bullshit to you. I’m also going to draw on my experience of the past in terms of what Jack Nicklaus did for me, what Arnold Palmer did for me… where there was that respect handed off from the generation before you. It’s a code of conduct in a lot of ways. Very few people know this: when Tiger won the Masters this year, I wrote him a handwritten note and drove down my road, maybe a quarter of a mile, and hand-delivered it to his guard at his gate. I said, “Hey, this is Greg Norman here. I’ve got a note for Tiger – can you please hand-deliver it to him?” Well, I never heard a word back from the guy. When I won my first major championship, Jack Nicklaus was the first person to walk down out of the TV tower and congratulate me. I don’t know—maybe Tiger just dislikes me. I have no idea. I’ve never had a conversation with him about it. I’ve always been respectful about what his father did for him. I played nine holes with him at his father’s and IMG’s request when Tiger was 14 or 15 and I was the No. 1 player in the world, to give an assessment of this kid. So, I have always been willing.”

Now, this could have been a misunderstanding, as Greg Norman did say that he dropped the handwritten letter to Woods’ security guard at the gate of his house. Could the guard had kept it for himself? Possibly. Could it have gotten lost in the shuffle of all the congratulatory notes Woods, seemingly, received after the Masters win? Of course. Then again, this sounds too fishy for it not to be a complete snub from Tiger.

It’s interesting to hear Greg Norman talk about this, though, because, as mentioned to Men’s Health, he’s known Tiger for a long, long time, and has always treated him with respect. Sure, there have been tense moments in the past — with Norman going on record as saying he didn’t think Woods would ever win another major after his stunning 2009 U.S. Open victory, which was something many pundits believed — but would that be enough for Tiger to ghost him?

Let’s see if Tiger Woods has anything to say in response to Greg Norman’s claims as this story makes its rounds. My guess is that, once the 15-time major champ gets word of it, he’ll do play the PR card and thank Greg Norman and it’ll all just fizzle out. Then again, Woods is ruthless, so maybe he laughs it all off and doesn’t even give it any attention at all? That seems like a classic Tiger move.