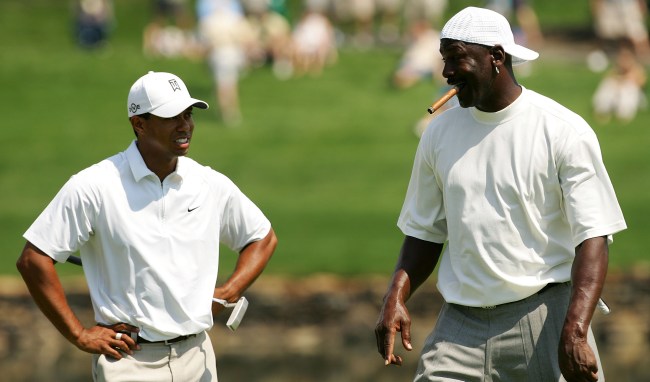 When NBC Sports caught up with 23-time Olympic gold medalist Michael Phelps to discuss the viral video of him intently watching Tiger Woods on Sunday at the Masters, it captured just how rare it is for two athletes considered by most to be the greatest in their sports to come together.

Phelps, more so than probably any other human being on the planet, considering each man’s success and very public tribulations, knows very well what Tiger Woods has been through in the 11 years between victories at a PGA major.

“Being able to watch him and how in control he is of every single thing on the golf course. I feel like every step is so calculated and every little small detail he pays so much attention to. It’s something I can relate to,” said Phelps about watching Woods perform at the Masters.

One other person who has the kind of unique perspective to understand better than most what it’s like to be Tiger Woods is NBA GOAT Michael Jordan.

Back in 2016, while discussing Tiger Woods, Jordan told ESPN the Magazine, “The thing is, I love him so much that I can’t tell him, ‘You’re not gonna be great again.'”

Now, in an interview with The Athletic’s David Aldridge, Jordan is singing a different tune about his old golf buddy.

“I never thought he’d get back physically,” Jordan admitted. “He didn’t think he’d get back physically. But he did it. No one expected him to be back the way he is now. He’s probably the only person who believed he could get back. To me, that’s a major accomplishment. To me, it’s unbelievable. Mentally, you always think you can. But you can’t answer to what your body has to deal with.”

Michael Jordan knows what it's like to be Tiger Woods, probably LeBron James, or Cristiano Ronaldo. For Tigers Woods to have everything out there for the world to ridicule, make jokes and then to win a Masters, I didn't see it.

In addition to all of the public drama surrounding Woods over the past several years, he has also had to deal with a torn ACL, a ruptured Achilles, and back fusion surgery – all things that Jordan believes makes Tiger’s comeback even more impressive.

“I took two years off to play baseball, but nothing like that,” Jordan told Aldridge. “I’m pretty sure he questioned himself, whether he could get it back, and he had to put a lot of work in. But he took it head-on. He had to change his game; he had to change his perspective a little bit. To me, it was the greatest comeback I’ve ever seen.”

As for whether MJ thinks Woods is officially back, “Dealing with his emotions, obviously he believed in himself. But until you put that into action, sometimes it’s a struggle. I think he’s gotten over the hump. I think he’s going to win more. It’s tough mentally. It’s absolutely tough mentally. And then you think about the physical. I’m elated.

“They (Woods’ tour opponents) got problems. His confidence is only going to build from here. The unknown is the biggest thing. You don’t know what Tiger’s capable of doing.”

They did, however, get a little taste of it on Sunday.

Check out the entire fascinating interview with Michael Jordan over at TheAthletic.com.

And as a bonus, because, as I pointed out earlier today, it is so rare for the stars to align and two GOATs of different sports to be together in one setting here are a few more pics from the past of His Airness hanging out on the course with the GOAT of golf.