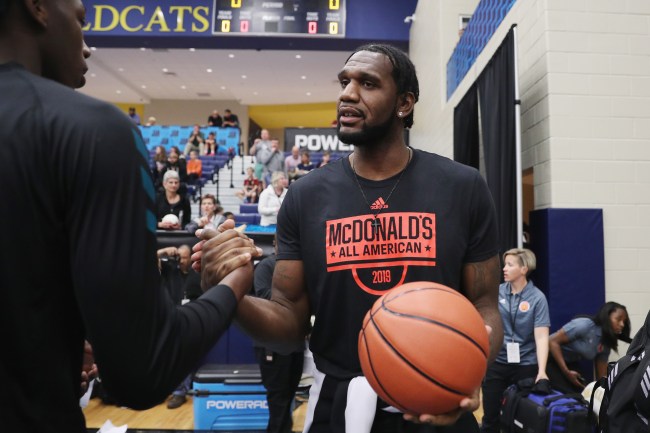 Greg Oden was one of the most-coveted prospects in a long time when he entered the NBA Draft after his freshman year at the Ohio State University. Selected No. 1 overall by the Portland Trail Blazers — ahead of some guy named Kevin Durant — Oden ultimately ended his career remembered as a bust more than anything else. It wasn’t his fault, of course, as injuries held him back from ever reaching the potential so many expected of him.

Fast forward 12 years, and Greg Oden is now trying to help a younger generation of basketball players. From serving as a student coach at his alma mater in 2017, to working as a coach at the NBPA Top 100 Camp, helping mold a portion of the nation’s elite high school recruits, the former NBA big man is still impacting the game in some way.

While he didn’t get a chance to fill out his full potential, Greg Oden’s at least giving some tips to this year’s likely No. 1 overall pick, Zion Williamson, who will become the top selection in tomorrow’s NBA Draft by the New Orleans Pelicans. Talking to The Crossover, per Sports Illustrated, Oden thinks that the hype around Williamson is way different than his own experience, while also saying he’s in a great position to succeed with his soon-to-be new team.

“[Williamson] is a little bit different, he’s on TV and they’re showing highlights when he’s hurt and on the bench,” Oden said. “So the attention is on a bit of a different level than I got even with a lot of people watching me, but he’ll be great. He’s an explosive player, he’s a different animal that people haven’t seen before.”

“Zion’s got some talented people around him, so the attention shouldn’t be too intense.” Oden said. “He should be able to run and play in transition and do the things that are going to make him the top pick. It’s a nice situation I think to come in to.”

In Greg Oden’s eyes, the Pelicans, who just traded away superstar Anthony Davis, still have lots of talent to surround Zion Williamson with, which should help him reach the level many think he will. That’s similar to Oden’s own experience, who played a contributing role on a 2008-09 Blazers team that won 54 games behind guys like Brandon Roy and LaMarcus Aldridge.

Given Zion’s insane athleticism and build, Greg Oden also talked about how young players these days can, seemingly, do it all. Unlike the days he was a prep star, the former big man says these’s almost no such thing as positions anymore, with the versatility of kids at an all-time high.

“I would say, the kids today can really do it all,” Oden said. “When I was in the Top 100 camp, you knew who the point guards were, who the shooting guards were, I was obviously with the bigs. There were a couple of guys who were different, maybe a big guy that could shoot, but now all these guys can shoot, really. All these guys can handle the ball, play 1-on-1 from the three-point line and toward the rim. So it’s exciting to work with them on every aspect of the game and make players who can succeed in a lot of areas.”

It’ll be interesting to see if Greg Oden’s thoughts on Zion Williamson happen or not. But, having gone through something similar himself, there’s nobody better to at least offer some tips should the soon-to-be top pick needs someone to talk with.