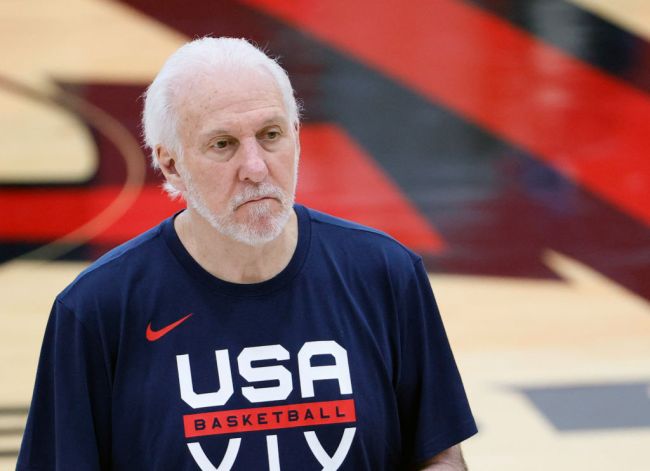 Team USA has suffered back-to-back exhibition losses after falling to Nigeria on Saturday night and to Australia on Monday evening. Losing exhibition games isn’t normal for Team USA, the Americans were 54-2 in exhibition games dating back to 1992 when professionals were first allowed to play.

Gregg Popovich is constantly upset at anything and everything, but even more so now seeing as how his squad is playing more like a mediocre Division III college team instead of a team full of NBA superstars.

After Team USA’s 91-83 loss to Australia, a reporter sent Popovich over the edge. The question was totally legitimate, however, as the reporter simply asked what the experience like for Popovich to be struggling and losing to these teams that Team USA has blown out in the past.

Gregg Popovich gets into exchange with reporter after Team USA's loss to Australia. pic.twitter.com/5XEp114qIh

Popovich, who is leading Team USA in the Olympics for the first time in his career, immediately said that the reporter was just assuming things regarding Team USA blowing those teams in the past.

No, the reporter isn’t assuming anything, he is simply stating facts.

A History Of Team USA Blowing Teams Out

We also need to talk about the embarrassing loss to Nigeria. Exhibition or not, the loss is without question one of the biggest upsets in international hoops history. Team USA beat Nigeria 156-73 – that’s an 83-point differential – during the 2012 Olympics. The two sides met again for an exhibition in 2016 where Team USA won by 44 points.

So, for Popovich to say that Team USA hasn’t blown out good teams or the two teams they just lost two in the past is just flat-out wrong.

The worst part of the exchange is when the reporter tries to get in a word with Pop midway through his answer, but Popovich makes a scene trying to embarrass and belittle him, his go-to move in his press conference playbook when the going gets tough.

Popovich knew the reporter was going to mention the past blowout wins over Nigeria and Australia, but got all defensive, despite the reporter being in the right.

In more recent years, specifically during the 2019 FIBA World Cup, Team USA was not good. The Americans finished seventh, but that is pretty much the only leg Popovich has to stand on when it comes to his ludicrous comments about Team USA not blowing teams out in the past.

Credit to the reporter for asking the very basic and legitimate question. If Popovich is sick of hearing questions like that, maybe win a basketball game.