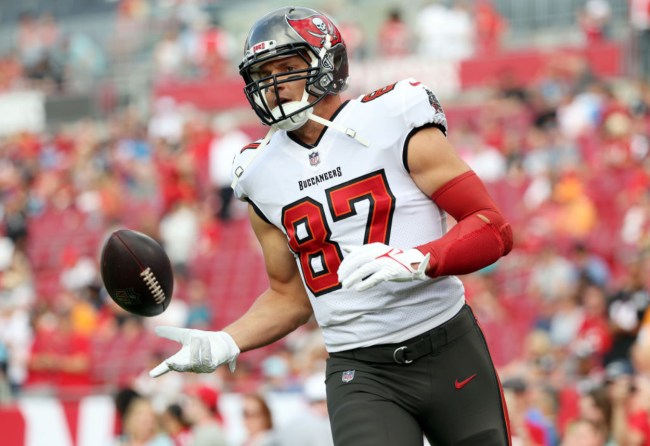 Tom Brady helped out his friend and teammate Rob Gronkowski in a major way during the Buccaneers’ regular-season finale, but Gronk didn’t exactly return the favor.

Gronk needed to catch seven passes to earn $500k in incentives and pick up 85 receiving yards to earn another $500k against the Panthers.

Gronkowski had 85 yards through three quarters but was one catch shy of the magic number late in the fourth quarter. Brady took it upon himself to get Gronk the ball and defied head coach Bruce Arians instructions to sit the rest of the game.

Tom Brady defied Bruce Arians and came back into game to help get Gronk his final catch for $500k incentive pic.twitter.com/bwwV8dZWDX

Brady did his job in getting Gronk his $1 million in incentives, but it apparently wasn’t enough to get a dinner invite after the game.

During the newest episode of the ‘Let’s Go!‘ podcast, Brady revealed that he didn’t make the guestlist for Gronkowski’s postgame celebratory dinner. He wasn’t upset about missing out on the celebration, but it’s still hilarious Gronk didn’t put his name on the list.

“I don’t know, man. That’s ok. I know what he eats. Let’s just say it’s not along the guidelines of TB12 so he can have his dinner without me,” Brady explained.

Brady went on to joke that Gronk wouldn’t be invited to his celebratory dinner either. Instead, Brady is going to treat just his offensive linemen to a nice steak dinner.

It’s safe to say that Brady and Gronk will still be on the same page during the playoffs despite trading jabs about dinners.