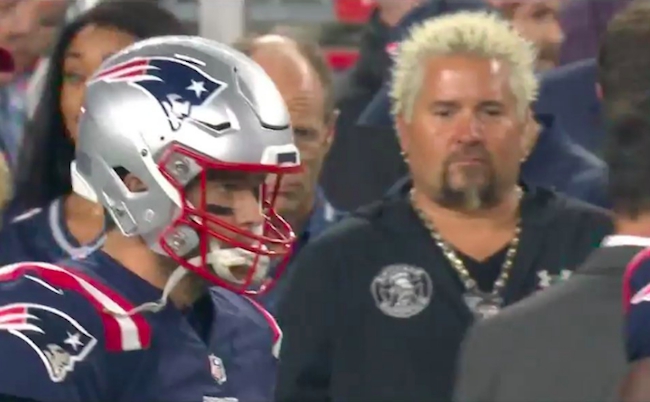 Last night, Tom Brady added to his legend when he tossed a 34-yard lob to Josh Gordon in the fourth quarter of the Patriots matchup with the Colts and recorded the 500th touchdown pass of his career.

That whole “TB12” thing seems to be working out pretty well.

There were plenty of highlights from the game but I’d argue the best moment of the night had nothing to do with what happened on the field, as it turned out Brady wasn’t the only G.O.A.T. in the building.

The history books might show the game was played in Foxborough, MA, but as far as I’m concerned, it officially took place in Flavortown, USA thanks to the presence of Mayor Guy Fieri.

Tom Brady and a LEGEND in the same photo pic.twitter.com/BbNLc4Z4Fz

There was a man out there encouraging people to flee Flavor Town for the cold, uncaring brace of avocado ice cream and Guy Fieri was going to find him if it was the last thing he ever did. pic.twitter.com/pgGXwCXSoS

feel like guy fieri makes this face whenever he walks by a whole foods pic.twitter.com/wGAGzlyAUd

Guy Fieri on the sideline – Patriots by 100. pic.twitter.com/y6G94udUhI

So few know that @GuyFieri is the head of flavor development for the @Patriots pic.twitter.com/u8dEJrbFGf

Based on a report from a fan, it appears Fieri was a guest of Robert Kraft but apparently still has a way to go before he reaches Meek Mill status and gets an invite to the owner’s box.

It’s not entirely clear why Fieri was in attendance (he’s a diehard Raiders fan and was rocking the silver and black), but as For The Win pointed out, he does have a couple of New England connections:

He’s been part of Brady’s Best Buddies foundation. He also once reviewed pizza with wide receiver Julian Edelman, who later gave his gloves from his iconic Super Bowl LI catch to Fieri’s son.

Based on a photo he posted with Willie McGinest, it looks like Fieri enjoyed himself.

He was also nice enough to pose for a photo with a guy who yelled incessantly at him for a half hour.

There are no words in the English language to articulate just how jealous I am of that dude.