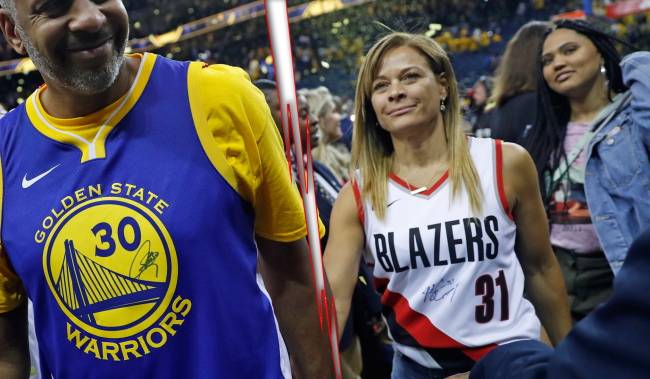 Stephen Curry’s parents Dell and Sonya Curry revealed on Monday that after being married since 1988 they would be getting a divorce.

Sonya and Dell, 57, met while both were athletes at Virginia Tech, Dell in basketball and Sonya in volleyball. Dell went on to play in the NBA from 1986 to 2002 for the Jazz, Cavaliers, Hornets, Bucks and Raptors.

Sonya, according to TMZ, was the one who filed the divorce papers, on June 14 in North Carolina. No reason for the divorce has yet to be revealed, but the couple did issue a statement to People magazine addressing the split.

“After exploring a trial separation over the past year and much thoughtful consideration, we have decided to end our marriage. As this comes with a great deal of sadness, our focus and desire is for our family’s continued happiness,” it read. “We are so thankful for all the many blessings and successes! We stay committed to and supportive of our children and grandchildren and will remain on connected paths. We ask that our privacy be respected and prayer for our family as we move forward.”

Dell and Sonya garnered much attention back in 2019 when their sons Stephen and Seth played against each other in the Western Conference Finals.

Related: Steph Curry Had An A+ Reaction To Seeing His Mom Cheering For Him While Wearing Blazers Gear

Sonya quickly became one of the most favorite parents of a pro athlete by fans, popularity that was never more apparent than in the hours following the announcement that she was about to become single.

Me sliding into Sonya Curry's DM's to be Steph Curry's stepdad

How Drake bout to be flirting with Sonya Curry after hearing about her and Dell's divorce pic.twitter.com/DH08HwmFY0

NBA Players to Steph Curry after the game pic.twitter.com/rP7IdyLgmm

Steph bout to see me at Sonya Curry house cooking eggs like .. pic.twitter.com/NvzSUliUNA

How all the uncles pullin up now that Sonya Curry is single pic.twitter.com/LkKYWyGeBv

Sonya Curry is back outside pic.twitter.com/Rgy3gswXDZ

Everyone from age 18-75 in Sonya Curry’s dm like pic.twitter.com/tuCfUq2b6m