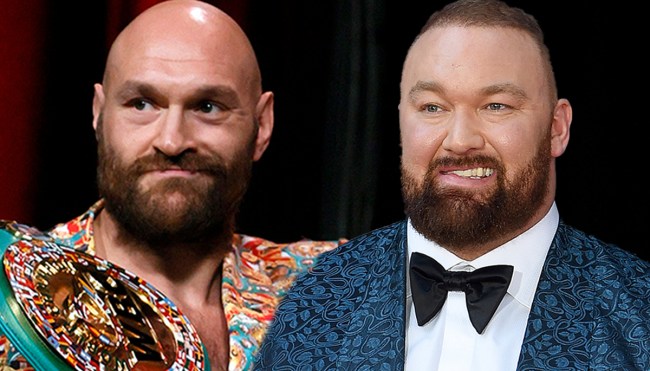 It appeared Tyson Fury’s career as a professional boxer officially came to an end earlier this year when he announced he was hanging up his gloves after dispatching Dillian Whyte with the uppercut that served as the knockout blow in their bout at Wembley Stadium back in April.

Fury basically confirmed he had nothing left to accomplish in the realm he first entered when he made his pro debut in 2008 after claiming he’d need $500 million to come out of retirement. However, it does appear the two-time heavyweight champion is open to engaging in other forms of fisticuffs—including the “hybrid fight” against UFC powerhouse Francis Ngannou he teased following the aforementioned victory.

Dana White has made it pretty clear he’s hesitant to give that bout his seal of approval, so while it’s unclear when (or if) it may come to fruition, it looks like The Gypsy King has a pretty solid fallback option courtesy of strongman-turned-actor-turned-boxer Hafthor Bjornsson.

Bjornsson is best known for portraying Gregor “The Mountain” Clegane on Game of Thrones, a role that the Icelandic native was able to land thanks to the massive amount of muscle he managed to pack onto his 6’9″ frame en route to winning the title at the Arnold Strongman Classic, Europe’s Strongest Man, and World’s Strongest Man competitions in 2018.

The man many know as “Thor” underwent a dramatic transformation after he decided to turn his attention to boxing a couple of years ago. He weighed in at 340 lbs prior to his pro debut against a 217 lb opponent (which ended in a draw), but he shed more than 100 pounds and got impressively ripped with the help of an insane workout regimen that’s helped him walk away with the victory in his last two fights.

Now, TMZ Sports reports he’s turned his attention to Fury, who seemingly issued a challenge this week when he posted a picture of Bjornsson on an Instagram Story accompanied by a caption that read, “I wonder if Thor could take a crashing right hand to that big jaw.”

Bjornsson responded on Wednesday by uploading a video where he clapped back by saying, “Tyson, there’s only one way to find out” along with a caption of his own stating he’s “100% up for a war.”

When you consider the two men are the same age and the same height, it would seem like Fury would have a huge advantage when you consider he has 33 pro bouts under his belt (and has won multiple championship belts) as opposed to the four sanctioned fights Bjornsson has competed in.

With that said, they also seem to have one thing in common: the thrill comes with making lots of money. As a result, it wouldn’t be a huge shock to see this go down at some point.