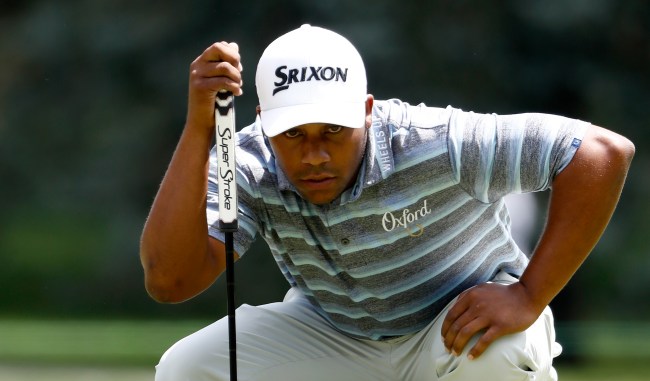 PGA pro Harold Varner III finished in 5th place last weekend at last week’s tour stop, A Military Tribute at the Greenbrier. It was his best finish on the PGA Tour this season and it earned him a whopping $247,470. You’d think that with money like that a 27-year-old dude would hit the steakhouse to celebrate or treat himself to a new watch, but that’s not how Harold Varner III celebrated.

Instead of going out and blowing money on the town, Harold Varner III went home and mowed his parent’s lawn and earned the ‘Son of the Year Award’ along the way:

5th place in yesterday’s PGA Tour event. Cutting the rents yard at 7 am this morning. #Persepctive #WeHere @JohnDeere I might look better in some green 🤷🏿‍♂️. https://t.co/dYCuWGliXN pic.twitter.com/IVGRqwFJ64

He was the co-leader after 54-holes but slipped to 5th place by the end of the day. At the press conference after his 3rd round, he had these wise words about success and keeping it all in perspective while leading a golf tournament:

“I hate to harp on it but it’s all about perspective. If I shoot 90 tomorrow, I’m going to be able to go home and my mom’s going to give me a kiss and be like “you’re still a winner” and I’m gonna be mad but that’s just how it is. And if I win, she’s gonna humble me and be like “you’re not better than me.” And I thoroughly enjoy that. I’m gonna mow my parent’s grass on Monday. So…that’s just what I’m gonna do. (via PGA Tour Twitter)“

Harold Varner III’s only professional win came at the Australian PGA Championship in December 2016 (2017 season), and his best finish in a major is Tied for 66th at the Open Championship. After seeing how he’s handling bits and pieces of major success I’d love to see him take home a trophy in the near future, wouldn’t you? He’s just so darn likable as a pro athlete.