Harris English Talks To Us About His Ryder Cup Aspirations, Georgia Football, And His Favorite Swing In Golf 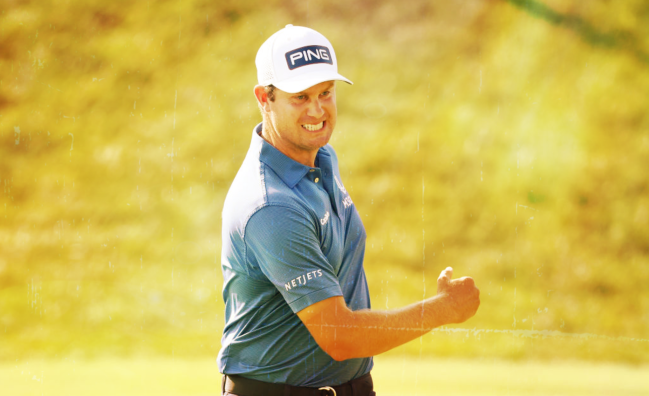 Harris English has had a stellar year on the PGA Tour earning two wins and six other Top 10 finishes. The 32-year-old was rewarded for his strong play with a $1.1 million bonus after locking up the No. 4 spot in the Comcast Business Tour Top 10 heading into the FedEx Cup Playoffs.

We had the opportunity to speak with English about his strong season including his excitement level for the upcoming Playoff run and his desire to make the Ryder Cup team. The former Georgia Bulldog also touched on what’s changed for him over the last 18 months to move from outside the Top 200 in the world to being the No. 10 ranked player in the game today. English also offered up his prediction for Georgia football this season, how great a Georgia takeover at the Ryder Cup would be, and shared what player’s swing on Tour he envies the most.

Just to start things off, you didn’t tee it up last week at the Wyndham but still secured the No. 4 spot in the Comcast Business Top 10 and earned a $1.1 million bonus in the process. That’s not a bad off week, what’s it mean to you to earn that spot showing just how strong your play has been all year?

Harris English: It’s very nice to be recognized for putting everything together for a full regular season. To get a bonus on that is huge. Throughout the whole year you’re focused on getting into the Tour Championship and having a chance to win the FedEx Cup and to be in a position after the regular season, getting that spot in the Comcast Top 10, it’s just a great bonus, a great reward for the regular season. I was pumped to see what position I was in finishing fourth.

You come into these FedEx Cup Playoffs with some momentum with three Top 5’s in your last four starts. You also played well in last year’s Playoffs. You’ve gotta be looking forward to teeing it up over the next few weeks in a strong position in the standings and playing so well.

English: That’s kind of what played into me taking last week off and get some rest for these next two weeks. There’s some really tough golf courses and you’ve got to be sharp. I feel like everyone is playing some really good golf right now this time of year and you’ve got to be on your A-game. [The Playoffs] mean a lot and we’re playing for a prize that we’ve been working towards all year, since last September. I’m excited for these next few weeks, excited for this three-week stretch for sure.

The Journey To Becoming A Top 10 Player In The World

Just going back to last year, back in January you were ranked outside the Top 200 in the world. Then after the COVID pause things really seemed to click for you. You’ve since earned two wins and you’re the No. 10 player in the world. What’s sorta changed for you over the last 18 months and what do you credit most for this great form as of late?

English: Just working a good bit at home with my coach, a lot of fundamentals, a lot of short game drills, and just really honing in on my fundamentals. If my takeaway gets a little off then it messes up my timing, so my coach has really been staying on top of me with that stuff. Just been working really hard.

I was not in a place with my game that I wanted to be, I had fallen off pretty good. It takes a lot of work to get it back and hopefully now I’m better now than I was a few years ago.

There are two weeks before the Ryder Cup picks are made. You’ve yet to represent the U.S. in a President’s Cup or Ryder Cup. Just how much is that on your mind over the next couple of weeks and how do you not let that sort of distract you, or do you feed off of that added incentive to play well and earn that spot?

English: I know that good golf will take care of itself. If I play good enough to get on the team, great, if I don’t, they’ll have a good team no matter what. Obviously, I’d love to make the team. I got to play in the Walker Cup in 2011 and anytime you can play for your country is awesome. It’s probably the pinnacle of our sport to play in the Ryder Cup.

It would be amazing to make the team, but I’m not really thinking about it on a day-to-day basis putting any more pressure on myself, I just know that if I play golf then everything will take care of itself.

Speaking of the Ryder Cup, fellow Georgia Bulldog Kevin Kisner won the Wyndham last week and he’s now in that conversation. He’s obviously a very good match-play player, how well do you think Kisner would be as a fit in a Ryder Cup setting? How fun would it be if you, Kisner, and Patrick Reed made the team and a Georgia takeover ensued?

English: Kis is a great team guy and a great match-play player, he’d fit in on that team for sure. I feel like I get along with everybody, play with everybody. It’s just a lot of fun playing in that team atmosphere, that’s what I miss playing when I was at Georgia. We don’t get that a lot out here on Tour.

[Steve] Stricker is going to have a tough time and I definitely wouldn’t want to be in his shoes picking the team. You’ve got a lot of guys, a lot of young guys playing well, and could all fit in with making the team.

Let’s talk about Georgia, college football kicks off in two weeks. What’s your prediction for your Bulldogs this season, is it SEC Championship or bust and will you make it back to Athens this Fall to catch a game?

English: I think on paper our front-seven on defense is one of the best in the game. We’re returning a lot of guys, it was awesome to have Jordan Davis come back, who is probably one of the best nose tackles in college football right now, so I was excited to see that. Just to have continuity of J.T. Daniels coming back, we have so many weapons on offense right now. The running back positions is incredible, and hopefully, our receivers will get healthy because I feel like we have a lot of great young guys. Hopefully, Arik Gilbert will get his stuff straight because I know he can be such a weapon.

We’ve got weapons all over the field. My only concern is how young we are at defensive back and safety. Opening up with Clemson is going to be a really tough game, looking forward to seeing where we are, but then after that, I think we can get through the SEC East fairly easily, but then you’ve got Alabama to get past at the end of the road. I say it every year, but hopefully, we can get over that hump.

Most people put your golf swing among the best on Tour with such solid tempo and balance throughout. Have any players in the past influenced your swing and, whose swing do you envy the most out on Tour?

It’s weird to say that guys you play with during a different round kind of rub off on your tempo. I love playing with guys with great tempo, I feel like it really helps me slow down my swing and for me to have good tempo as well. I love how Morikawa takes it away, how set he gets, and he’s never rushed. He’s got one of my favorite swings on Tour right now.