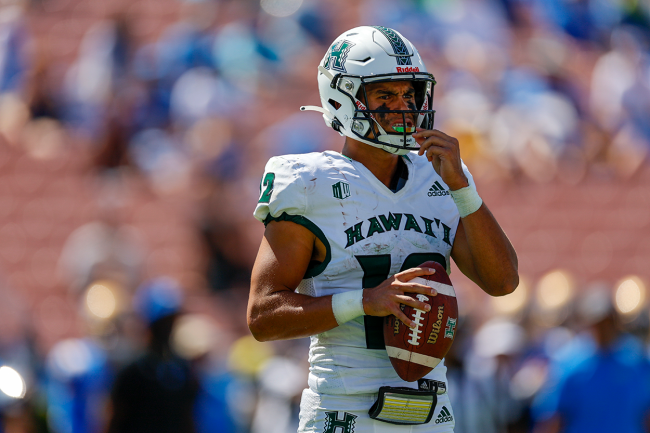 Conference realignment in college football is nowhere close to over. When Texas and Oklahoma left the Big-12 for the SEC and USC and UCLA left the Pac-12 for the Big Ten, the ball was only beginning to roll.

Over the course of the next few years, things are set to change drastically. Many people believe that this is the start of the eventual evolution toward two super conferences that breakaway from the NCAA’s jurisdiction.

No matter what is to come, TV money is set to play the biggest role in realignment. UCLA’s athletic director recently revealed that “significant debt” is the reason for the decision to leave the Pac-12. There is more money to be made in the Big Ten.

That will continue to be the case. Wherever money goes, more and more programs will follow.

When those programs leave one conference for another, it leaves holes in the conferences that they left. Those schools then need to be replaced.

Of the schools that are lobbying to join the Pac-12, Hawaii wants to be considered.

The Rainbow Warriors currently compete in the Mountain West, but joining a bigger ‘Power Five’ conference is obviously more lucrative. And for the Pac-12 to add Hawaii may not be a terrible idea. The school is West Coast based — or at least, adjacent — and has a sizable brand.

Hawaii is a more or equally as recognizable name than, say, San Jose State or San Diego State. However, it does not have up-to-standard facilities— yet.

After the announced demolition of Aloha Stadium in 2020, the Rainbow Warriors football team moved to a stadium with a capacity of just 9,000. That simply will not work in a ‘Power Five’ conference like the Pac-12.

But that is soon to change.

Hawaii’s governor approved a big move for the program on Wednesday and a ‘New Aloha Stadium’ is on the way. Plans to build the new stadium costing $400 million were approved as part of a new budget bill.

Request for proposals will then go out. Demolition scheduled for early 2023. https://t.co/Sr6qVpqZAB

According to Senator Glenn Wakai, there are three finalists eager to put in their bid to build the stadium. The hope is that a decision will be made by early 2023 with a new stadium built by 2025 or 2026— one or two years after USC and UCLA leave for the Big Ten.

Wakai also spoke about the potential of the University of Hawaii making a jump to a ‘Power Five’ conference, specifically the Pac-12. He thinks that the stadium could play a huge role in getting an invite.

“They could be the Pac-4, they’re going to need to add some teams,” Wakai said. “Could Hawaii make a play for that in 2025 at this point? No. But if we get a stadium, I think that only helps in your argument to invite us.”

Wednesday’s decision was the first step in a stadium-building process. There is a long way to go, but it could be a large factor in the upcoming and continued conference realignment.