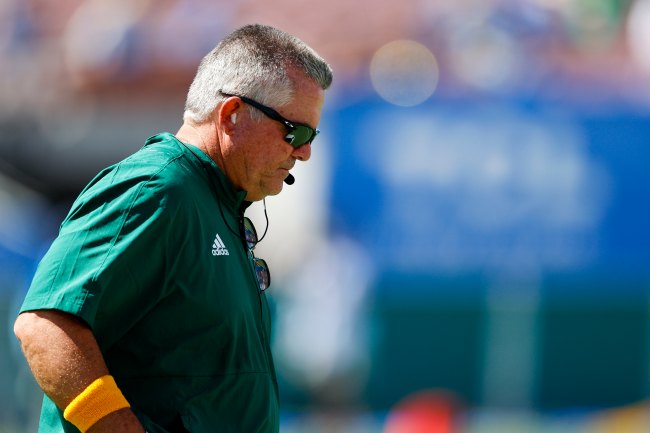 Hawaii head football coach Todd Graham is strongly disliked by many, if not the majority, of his players. The 57-year-old has been with the Rainbow Warriors since January 21, 2020 and it has reportedly been a complete disaster.

Thus far this offseason, the team has seen an absurd amount of players enter the transfer portal, including Graham’s own son. Graham has created a culture so miserable that players have said that he has killed their love for football.

Things got so bad that the state Senate got involved.

Former Hawaii players, some parents and even state senators blasted Graham and Hawaii officials during a nearly three-hour Senate hearing on Friday. The primary focus was accusations of verbal abuse from Graham.

“He’s hands down the worst guy I’ve ever met in my life,” said defensive back Leonard Lee, who was recently removed from the team after speaking out about the current climate of the program.

Graham and athletic director David Matlin both denied some of the accusations and said that work is being done to fix the issues. Asked if he would fire Graham if the school could afford his buyout, Matlin said no.

The issues first came to light in a Twitter space. Current and former players alike joined the space and spoke out about Graham and his behavior.

Lee was amongst them and said that he was kicked off of the team for being on the Twitter space. He teed off on Friday.

“Todd Graham likes to disguise it as discipline, the way he treats us and talks to us,” Lee said. “The verbal abuse he has toward us, it’s stuff I wish I could share, but it’s too vulgar to share in this setting. Playing for him for two years was incredibly mentally draining. I’ve played football my whole life. I loved it as much as anyone. It was hard to wake up and go do something you love with a guy like that in charge. The only way to describe him is a tyrant.”

Some of the best documentation of what happened at the senate hearing can be found on The Athletic. A Twitter thread from Hawaii sports anchor Keith Demolder also did a great job of detailing every moment.

The vast majority of the allegations are truly astonishing.

One of the most outlandish accusations against Graham came in regard to his attitude about his program and its facilities. He reportedly compared the team facilities to a third world country over a very minor soda-related inconvenience.

In addition, he allegedly insulted one of his native Hawaiian players for playing the Ukelele and used a vulgar slur that Demolder said “you can guess.”

further adds Graham said "Hawaii is a third world country…" for not having Dr. Pepper in the vending machines.

Reveals further vulgar language of calling players a word that I will not tweet…but you can guess.

This all comes in addition to claims that the team mishandled the health and safety of its players. The mother of a former Hawaii player who retired from the sport over a medical issue claimed that her son dealt with a concussion and suffered permanent brain damage.

When he reported it to the coaching staff, she says, no help was offered.

Needless to say, the accusations against Graham (of which this article only begins to scratch the surface) are truly unacceptable.

Graham admitted that he can improve upon his “old-school” coaching style, but did not offer remorse. Nor did he admit to much of the alleged behavior.

“Obviously there’s things that I’ve learned. You have to evolve,” he said. “Going back and reflecting as a coach, you always want to make sure your players know you love them. So, more empathy and those type (of) things. I do love these players. Every player that I coach, that’s why I coach.”

It would be hard to imagine a world in which Hawaii retains him as head coach, but crazier things have happened. Athletic director Matlin added:

Is there? Are the allegations not enough?