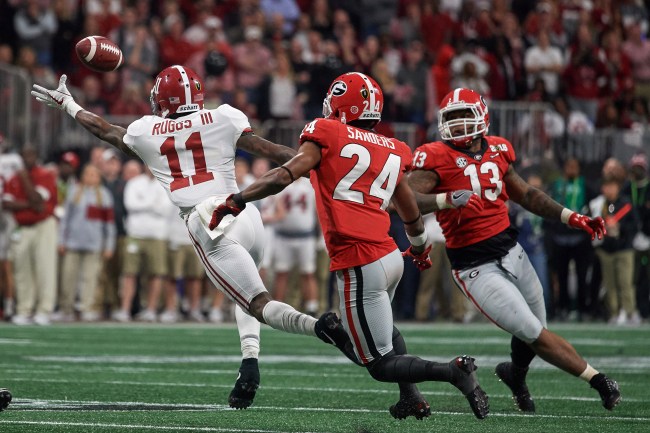 It may be time to start to consider whether or not Henry Ruggs III is actually an alien who only tacked the III on the end of his name to convince us doughy mortals that he had real human ancestors.

I ain’t stupid, Henry. Athletically inferior in every way, maybe. But I’ve listened to too many Joe Rogan podcasts to be naive to the presence of our celestial neighbors.

The 21-year-old Alabama product officially ran a 4.27 40-yard dash, tying Marquise Goodwin in 2013 for the 4th fastest at the NFL Combine since 2006 and the fastest of any of the wide receivers at the combine. This is particularly impressive seeing as there were 20 wide receivers that ran under 4.5 40 times, tied with 2014 for the most in a single NFL Combine since 2006.

On Tuesday, Ruggs, who finished his junior season with 40 receptions for 746 yards and seven touchdowns, said his goal was to beat Bengals wide receiver John Ross’ electronic timing format record of 4.22 in 2017.

"My goal is to be the fastest ever." – Henry Ruggs says he plans to break a 4.22 in the 40-yard dash pic.twitter.com/GGsEtl37rA

Henry Ruggs recorded a 4.27 in the 40 at the NFL combine yesterday. Here he is showing his athleticism in high school. (video via @hudl, JG Images, @__RUGGS) pic.twitter.com/WxK6slUuwA

Henry Ruggs about to be in the NFL but hadda show the bounce 🚀 (via @__RUGGS) pic.twitter.com/EfzLxGNU0a

Henry Ruggs says his goal is to have the fastest 40-yard dash time in NFL Combine history.

He showed off the jets on this play 💨 pic.twitter.com/MKCCIficmr

This man burned SEC defensive backs who had a 20-yard head-start.

Here is the 1 clip you need to see.

These pages wont show you this clip because this play was called back due to a penalty pic.twitter.com/eAlTGENf9I

ESPN reports that Mel Kiper has Ruggs going 22nd to the Bills and Todd McShay has him going 21st to the Eagles.

“He’s not the biggest guy,” Ruggs said. “So him being in that offense and making the plays that he’s making, doing the things that he does, it gives me more confidence to show that anybody can do anything.”

Anybody cannot do anything. I cannot windmill dunk from mid-paint or walk up a flight of stairs without getting gassed. You, on the other hand, sky’s the limit.