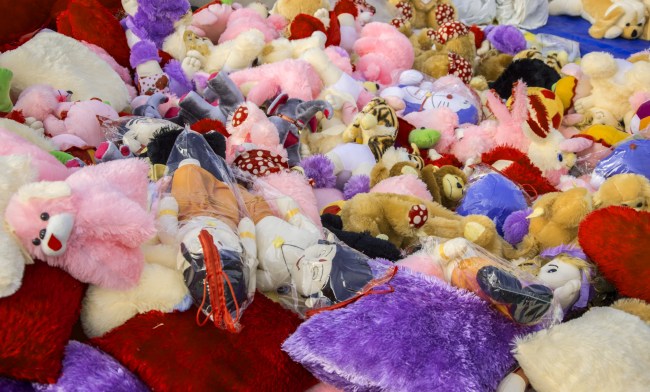 It’s the giving season, my dudes, and nowhere is this more evident than in the AHL (minor league hockey). The Washington Capitals AHL affiliate Hershey Bears just set a record for the most toys ever donated during a Christmas hockey drive with nearly 35,000 stuffed animals thrown on the ice and the footage is insane.

One of the coolest Winter traditions in hockey is the teddy bear toss. Fans bring a stuffed animal to the game to donate to charity and they’re thrown on the ice after the first home team goal is scored.

The previous AHL record for stuffed animals thrown was 28,815 and that record was held by the WHL’s Calgary Hitmen. According to SI’s Extra Mustard, there were only 19,289 fans at that game so there were 1.5 bears thrown per fan.

The Hershey Bears aren’t here to play second fiddle. There were only 10,046 fans at the Hershey Bears game where this record was destroyed when 34,798 stuffed animals were thrown on the ice creating a literal sea of toys. There were more than 3 toys thrown per fan and it looked incredible.

I’ve included the clip from both Instagram and Twitter so you can choose which medium you’d rather watch on.

Nathan Walker brought his bear from his locker to toss on the ice and add to the total. pic.twitter.com/i8T42j95iv

The players were loving it:

In case you were wondering, the Hershey Bears are currently in last place in the AHL’s Atlantic Division (8 out of 8) with a 10-12-0 record on the season through 23 games played. The Hershey Bears went on to win this game against the Binghamton Devils 6-3.

The Chocolate Hockey blog has a bunch of pictures from the night which you can scroll through here. (h/t Extra Mustard)