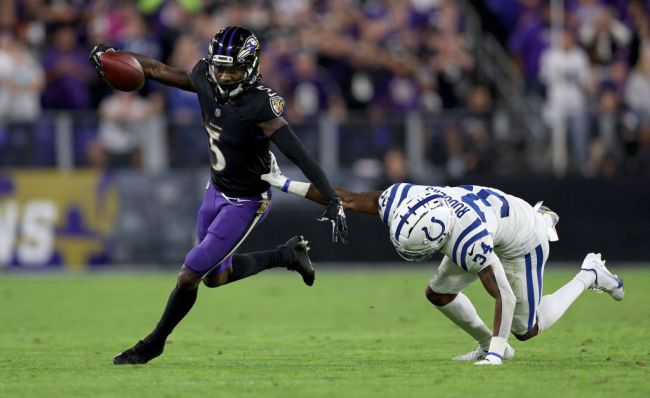 It has been more than 2 months since Hollywood Brown was traded to the Arizona Cardinals on draft night, ending his time with the Baltimore Ravens. Somehow, Brown still finds himself having to clarify why he requested that trade in the first place.

Some have blamed the relationship between Brown and Lamar Jackson and Jackson’s play for the trade request. However, that is not what actually caused Brown to seek out a new team.

Today, a fan posted a tweet asking for fans to see the context of Brown’s decision to request a trade.

Add some context. Hollywood Brown wanted out sure. Ravens are run first offense. Yall act like he wanted out because of @Lj_era8 Don’t try to create that false narrative and @Primetime_jet never said anything of the sort @undisputed

Brown later responded to the tweet, making it clear that his issues with the Baltimore Ravens had nothing to do with Lamar Jackson.

Facts! The Narrative they tryna create on my dawg is ridiculous, He can run the show in any type of offense he just so happen to be in the one he in and doing it at a top level ! And Every Wr whoever played with him knows that..🐐 https://t.co/fH8ZUZ2pW9

It’s surprising that this is something Hollywood still needs to explain to fans. Brown never hid the fact that he wasn’t happy with his usage in the offense and it’s easy to see why.

It’s not a new complaint and even former Ravens receiver, Willie Snead, has pointed out how the Ravens’ offense makes it difficult for them to attract receivers.

Brown was playing in the NFL’s most run-heavy offense, which prevented him from putting up the numbers he believes he’s capable of. With the limitations of the Ravens’ offense holding him back, Brown was going to have a tough time securing the type of contract he will likely deserve when his rookie deal ends.

That had nothing to do with Lamar Jackson and everything to do with the Ravens offense. Now he’ll get the chance to prove that in an offense where deep throws to Brown will likely be a regular occurrence.