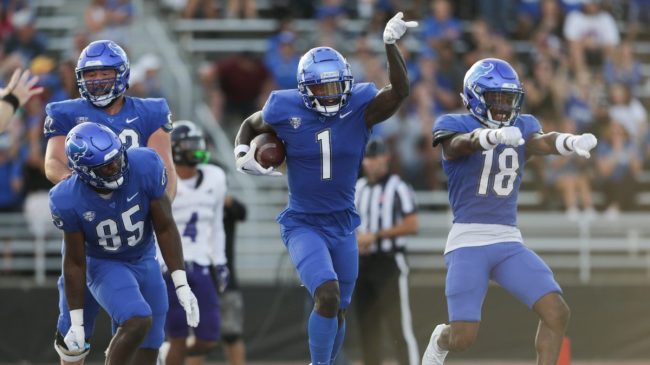 While Notre Dame suffered an embarrassing defeat to Marshall on Saturday, Holy Cross was staking its claim as the nation’s premier Catholic football program.

The small Jesuit college is located in Worcester, Massachusetts. It lists just 3,138 students as of 2021 and is a member of the Division I FCS Patriot League.

But the Crusaders are no slouches. They went 10-3 in 2021, including a 6-0 record to win the Patriot League. Despite that, they faced a tall task on Saturday against FBS foe Buffalo.

The Bulls struggled in their first season under coach Maurice Linguist, going just 4-8 and finishing in a tie for fourth in the MAC East Division. But prior to that, Buffalo reached a bowl game each year from 2018-2020 and twice reached the MAC championship game.

The Bulls entered the contest as 6-point favorites on their home field. They took an early 7-0 lead and led 21-14 at the break. But the Crusaders hung around and tied the game at 21-21 early in the third quarter. The teams remained tied late in the fourth quarter, this time at 31-31.

That’s when Holy Cross dialed up a little divine intervention.

Crusaders quarterback Matthew Sluka dropped back to pass from the Buffalo 45-yard line and heaved a ball toward the end zone. The ball then came down and somehow found its way through the hands of four Bulls defenders and into the waiting hands of Jalen Coker.

Ain't no Hail Mary like one for a Catholic college. https://t.co/N3X6ShSoSB

If you're facing a Hail Mary against a college called "Holy Cross", you already know you lost.

No point even trying. They got the Lord's help. https://t.co/bf91p3AzBV

I don’t think a school named Holy Cross should be allowed to attempt a Hail Mary. Doesn’t seem fair. https://t.co/NAmNAx70jw

The poor Bulls never had a shot.