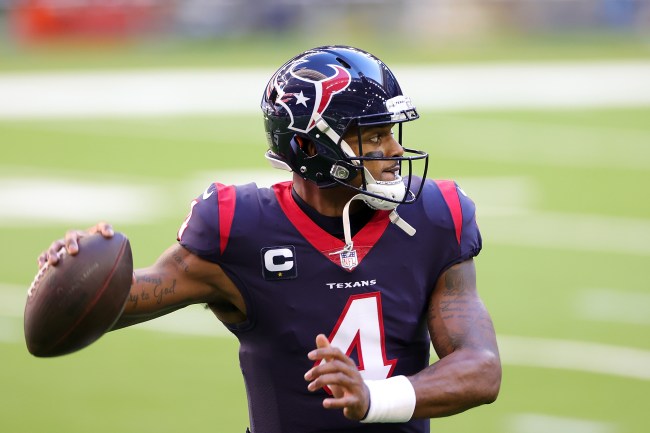 It appears that the Houston Texans are distancing themselves from Deshaun Watson due to his uncertain future with the team amid the 22 sexual assault lawsuits brought against him.

On Sunday a Twitter user noticed that the Texans had edited out Watson from the intro video of their in-house TV show Texans 360 that airs every week.

Deshaun Watson has now been completely removed from the intro to the in-house show pic.twitter.com/IzIjBYD9o2

And here’s last week’s video that shows Watson throwing the ball from behind at the seven-second mark that is missing from the current intro of the show.

This blew up. Happy for you that you Waldo'ed a screengrab of him in the distance, you're not the first. I'd edit out "completely" if I could. I've attached last week's intro, It's pretty clear he's being de-emphasized in comparison to where it was last week. That is my point. pic.twitter.com/rPE01cLBBb

Just last week NFL.com’s Ian Rapoport talked about how Watson’s playing future is “up in the air” as he currently deals with the sexual assault lawsuits.

These allegations are not going away absent Deshaun Watson somehow deciding to settle or these cases being dropped, which I don’t get the sense anything is happening anytime soon,” “It also means that his future on the playing field is a little bit up in the air.

“We don’t know what the NFL is going to do, what the NFL is doing to decide – if they’re going to act at all. The Houston Texans haven’t said much except for Cal McNair putting out a letter to season-ticket holders saying they’re deeply disturbed by the allegations.”

As for Watson, he’s reportedly trying to settle all 22 sexual assault lawsuits filed against him according to CBS Sports legal analyst Amy Dash.