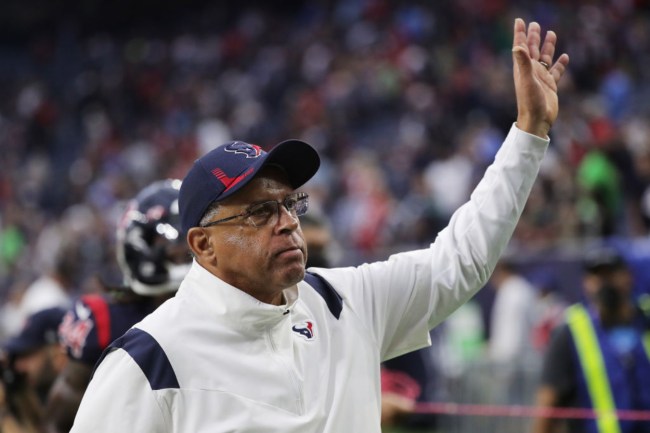 While the Miami Dolphins firing Brian Flores still sits atop the list of the wildest NFL coaching moves since the conclusion of the regular season, the Houston Texans firing David Culley is a close second.

Culley didn’t even make it a full year as the Texans’ head coach after being hired on January 29, 2021 and was officially being let go on January 13, 2022. He posted a 4-13 record with the Texans this season in what was his first head coaching gig in the NFL.

When the Texans hired David Culley, they only guaranteed him two years of money; they knew there always was the real chance he would be one and done. As one league source texted about his one-year tenure, “I knew it when he was hired.”

The 66-year-old certainly took over a unique situation in Houston given the fact that Deshaun Watson was sidelined all year with his ongoing legal battles. Culley having his elite QB out made things extremely difficult, obviously, but the Texans were able to be competitive on a semi-regular basis this season.

Of Houston’s 13 losses on the year, five of those losses were 10 points or less. The Texans’ biggest win of the year came on the road at Tennessee on November 21.

Despite not having his three-time Pro Bowl QB all season, the Texans didn’t appear to see enough out of Culley to give him another year. Ian Rapaport reports that one of the reasons Culley was fired is that he refused to make changes to his offensive staff, which is a bold strategy seeing as how the Texans had the worst offense in the NFL this season.

Here’s a look at how the NFL world reacted to the firing of Culley:

Dude won 4 games with Davis mills/Tyrod Taylor at QB….
Beat the #1 seed in the AFC by two possessions… organization is a joke. https://t.co/eTujMToQqQ

Culley never got a fair shot & it’s so obvious he’s being used as a scapegoat https://t.co/dzFJy2U0ZG