This Behind-The-Scenes Look At What It Takes To Feed An NFL Team Makes ‘Man Vs. Food’ Look Like Child’s Play 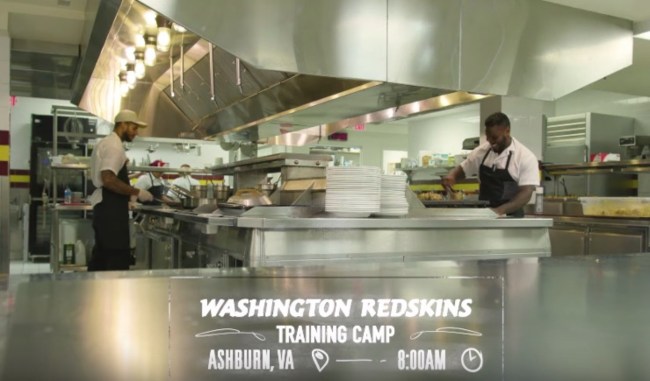 I am not sure I would last a week trying to eat like an NFL player. Some of these guys eat more in a day than I will in five.

In addition to being some of the largest men on the planet, they are finely-tuned athletes who are working all around the clock and that level of peak fitness doesn’t happen by accident. They have unique dietary requirements but on a MUCH larger scale than the average person.

This behind-the-scenes clip gives us a glimpse into the kitchen of the Washington Redskins. Despite being one of the weakest teams on the gridiron for the past decade or so it’s pretty obvious that their players have herculean appetites.

Here we see what it takes to feed a whole NFL team during Training Camp in Ashburn, VA when all of the team is together every day and isn’t getting in their meals at home.

And I don’t know what the offseason is like for them but I could easily see superfans paying $$$$$ for private dinners at that place in the downtime. I see no reason that fans wouldn’t rent that out as an event space either for things like Bar Mitzvahs and weddings when they’ve got such a sick kitchen on-site and already cook things like steak/chicken/mahi-mahi which we’re all accustomed to seeing on a wedding menu.

The thing I found the most interesting about this is the snacks. I regularly grocery shop at a rotation of Whole Foods, Publix, and a Target Superstore and haven’t seen a lot of those pre-packaged snacks the athletes have available and it makes me think I’m not getting access to the good stuff even when I’m willing to pay for it.