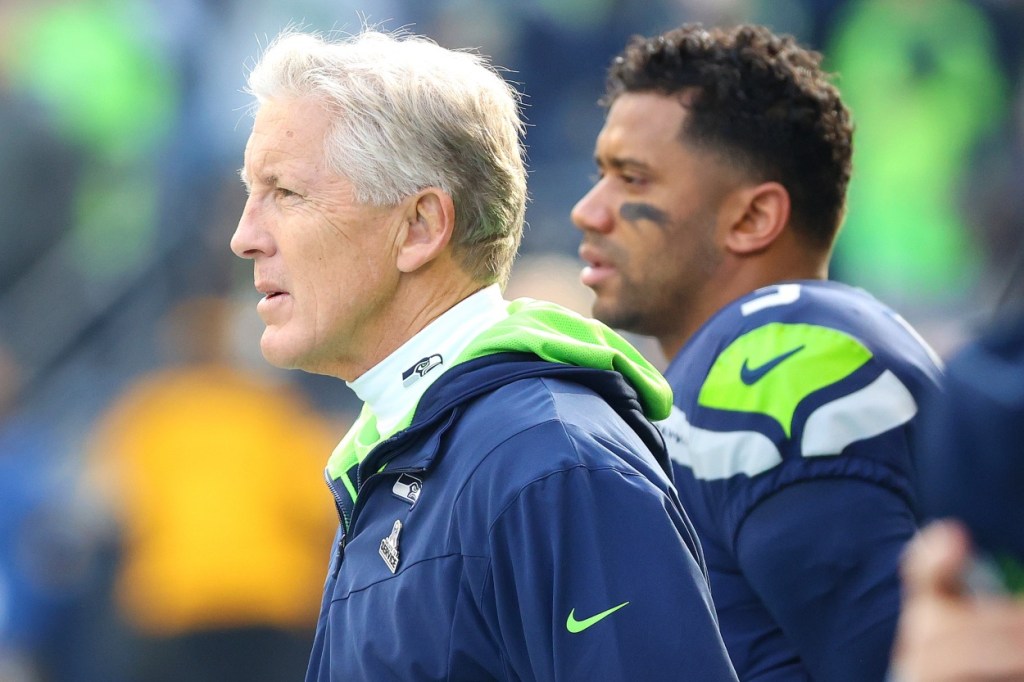 Consider this for a moment, the Seattle Seahawks organization played its first NFL season just 47 years ago in 1974. Russell Wilson was Seattle’s starting quarterback for a full decade. As a quarterback, Russ was the face of the organization for over 1/5th of the entire time the Seahawks have even existed and Pete Carroll has been there even longer than Russ was!

The 2022 NFL season is the start of a new era for head coach Pete Carroll and the Seattle Seahawks. It remains to be seen if Drew Lock will be successful in Seattle but one thing is for certain, Pete wanted to keep Russ with the Seahawks instead of hitting the ‘reset’ button.

Speaking with ESPN Radio’s SEASports710 this week, Pete Carroll shared how he (unsuccessfully) tried to convince Russell Wilson to stay in Seattle.

ESPN’s SEASports710: “Did you try and convince Russ to stay?”

Pete Carroll: “There was so much compelling reasoning why he would stay because of all the history and all the time spent. That was exactly where I was coming from, just to use the logic of it. When you’ve built a relationship over a long period of time there’s great benefits to that moving forward and well beyond your career and stuff.

Those are all parts of the conversation. What I continue to say, Mike, I had no intention of making a move at all while guys were under contract and we were pleased with what was going on and all. So, I fought for the logic of that for a good while until it wasn’t meaningful anymore to stick with that.”

Pete Carroll says on @SEASports710 that upon hearing from Russ that he wanted out, the coach tried to convince the QB to stay around. Says there were compelling reasons to stay. Pete says he fought for those reasons — until his efforts were futile.

Pete's full response when asked whether he tried to convince Russ to stay.

Final line: "I fought for the logic of that for a good while until it wasn’t meaningful anymore to stick with that." pic.twitter.com/w7pjr0hA82

Carroll called trading Wilson "an opportunity in many directions." Points to the 2023 draft where the Seahawks will have two firsts and two seconds, and they also were able to get more cap room because of Wilson's large contract.

That last line is pretty telling. “It wasn’t meaningful anymore” to discuss existing relationships and that’s the moment Carroll and the Seahawks realized it was time to move on amicably.

Carroll said the Seahawks are looking all over as it pertains to the QB position. Mentioned Geno Smith and how he knows the team and system and that he played well last year and would have a leg up on anyone else they bring in. Said "there are some other options, too."

"It goes all the way back to our (draft) evaluation," Carroll says of Drew Lock. Says he's a clear communicator, has a good arm, is smart, competitive, a clear thinker and resourceful.

"Imagine if he was in the draft this year where he would go."

Here's what Pete Carroll told @TheMikeSalk on @SEASports710 today when asked about what's next for Seattle at quarterback: pic.twitter.com/PbBRxdPXe2

I’m always astonished by NFL figureheads going on radio shows and speaking so candidly about their teams. Bill Belichick does it. Jerry Jones does it. Pete Carroll did it here.

NFL teams are normally so guarded with news that comes out of the locker room but radio seems to be the portal where the head coach speaks freely, or at the very least shares the information they’re willing to divulge in a seemingly conversational format.