The brainchild of UFC President Dana White as a solution to the ongoing pandemic, sports fans have waited months for the chance to watch UFC 251: Fight Island — and now it’s here exclusively airing on ESPN+ this Saturday night.

Dana White just gave a video tour of the build out in Abu Dhabi last week. Featuring an incredible three title fights like Kamaru Usman vs. Jorge Masvidal, Alexander “The Great” Volkanovski vs. Max “Blessed” Holloway, and Petr Yan vs. Jose Aldo, UFC 251 Fight Island is about to be an action-packed sporting event like never seen before – something all sports fans deserve right now.

How to order UFC 251 Fight Island

You can already order UFC 251 via ESPN+ so you’re ready to go on Saturday.

The UFC 251 main card PPV starts on Saturday, July 11th at 10 p.m. EST, coming live from Abu Dhabi, United Arab Emirates. Will Kamaru Usman be able to hold off challenger Jorge Masvidal for the Welterweight Championship? Can Alexander “The Great” Volkanovski add to his 11 wins by knockout against Max “Blessed” Holloway? What will Petr Yan vs. Jose Aldo give us? And what about the bouts on the women’s side, where we’ll see Jessica Andrade pitted versus Rose Namajunes in a rematch of their UFC 237 title fight, when Andrade won by slam knockout?

With tons of storylines, one thing’s clear: No sports fan wants to miss out on UFC 251: Fight Island — so make sure to tune in on ESPN+.

With such tasty matchups on the Main Card, take a look below at some details and info on the fighters involved in UFC 251: Fight Island. Given the premier and exclusive event, something tells us some serious history could be made.

Usman and Masvidal got heated in Miami at the Super Bowl this past year, so there’s a lot boiling between them. The undefeated Kamaru Usman is the UFC Welterweight Champion, No. 6 ranked pound for pound fighter and a former NCAA Division II National Wrestling champion. His opponent, Jorge Masvidal, is the No. 3 ranked Welterweight and 2019 Fighter of the Year. He holds the record for fastest knockout in UFC history.

Alexander Volkanovski is the current UFC Featherweight Champion, and holds 11 wins by knockout. His challenger, Max Holloway, is a former UFC Champion himself, and holds the most wins ever in the featherweight division, was the 2017 Fighter of the Year and is regarded as one of UFC’s most popular fighters.

Petr Yan’s the No. 3 ranked UFC bantamweight and is riding a nine-fight win streak. On the flipside, Jose Aldo is a previous Fighter of the Year (2009), and a former WEC and UFC Featherweight champion.

It’s about to go down, guys, so don’t miss out on the historic action happening at UFC 251: Fight Island and remember to get ESPN+ in order to take it all in. 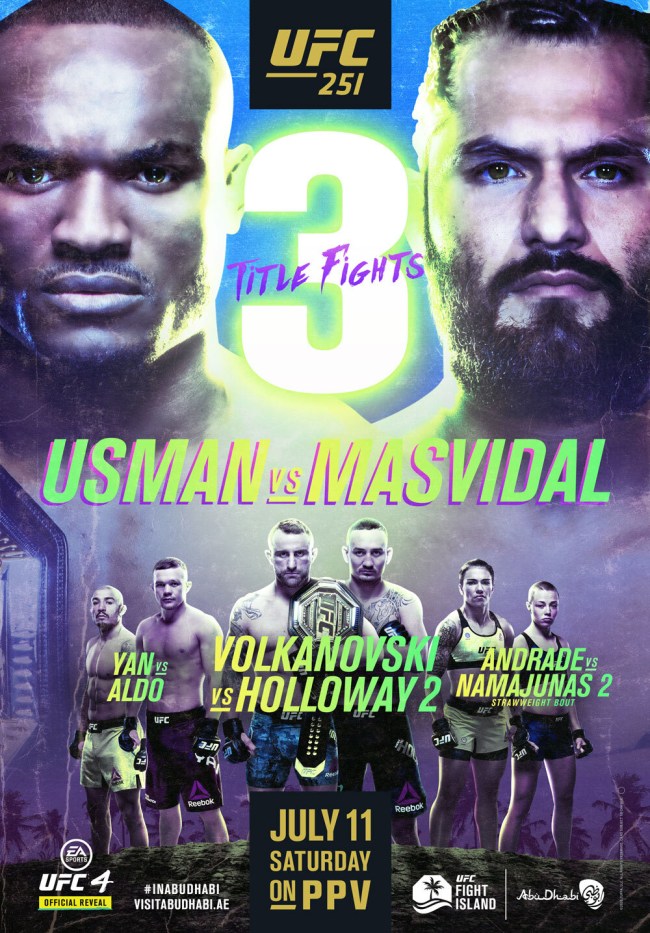 And for those diehard UFC fans, get yourself ready for UFC 251: Fight Island by watching some great ESPN+ Originals ahead of the fight — like Detail: Daniel Cormier: Breaking Down Max Holloway, and the 30 for 30 film Chuck & Tito.

Remember, ESPN+ is the exclusive home for all the action inside the Octagon. So, if you’re already planning on watching UFC 251: Fight Island, you’ll want to make sure you score yourself all the dope content that the streaming service offers. Just look at some of the programming on ESPN+ that you’ll get with a subscription.

If you’re a sports fan, ESPN+ is the one-stop shop to consume all sorts of your favorite content. And while waiting for UFC 251: Fight Island to take place on July 11th, the streaming service will be a lifesaver to get your sports fix with hours of content.