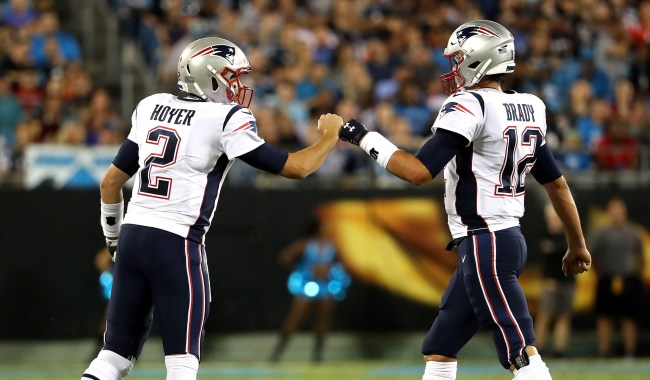 For the first time in two decades, when the New England Patriots begin the regular season there will be someone other than Tom Brady under center.

After 74,571 yards and 541 touchdowns passing, 18 AFC East titles, and six Super Bowl wins, the team will be led by someone other than the four-time Super Bowl MVP.

Quite a change, right?

Not really, if you listen to Patriots head coach Bill Belichick and backup quarterback Brian Hoyer, who appear to be doing their best to defuse any talk of the team missing TB12.

Two weeks ago, The Hoodie tried to downplay the impact of not having Brady on the team, saying, among other things, “Well we’ve had a lot of great, great players over the course of that time. You could have the same conversation about all of them – Tedy Bruchi, Rodney Harrison, Ty Law, Logan Mankins, Rob. You could go right down the line. So, it’s professional football. It’s the National Football League. Every team has changes every year.”

Then this week on a video conference with the media, Hoyer, who is on his third run with the Patriots, was asked if the offense is looking any different without Brady.

“No not really, I mean look there’s 20 years of foundation in this offense, and I think the one thing that I’ve realized is each year that I’ve been a part of the team the offense is a little bit different you adjust to your players your personnel the defense’s scheme and I think that’s the great thing about this offense, it’s always evolving,” said Hoyer.

“I think there’s a great group of core plays and formations and things that we have and I think on a weekly basis that’s what we do the best — go in and see what we need to do to attack the defense.”

The 34-year-old also added, that despite having played for eight different teams during his 11 years in the NFL, and currently sitting at third on the depth chart behind Newton and Jarrett Stidham, Hoyer is still taking the same approach he always does.

“I’m always competing for the starting quarterback spot whether it was Tom in front of me or whoever else was here,” said Hoyer. “I think you have to look at it that way. You never know when your number’s going to get called. You never know what you are going to get and you really can only control what you can control. I go out there and whatever reps I have, I try to go out and execute them the best I can and until someone tells me otherwise. I’m always gonna prepare like that.”