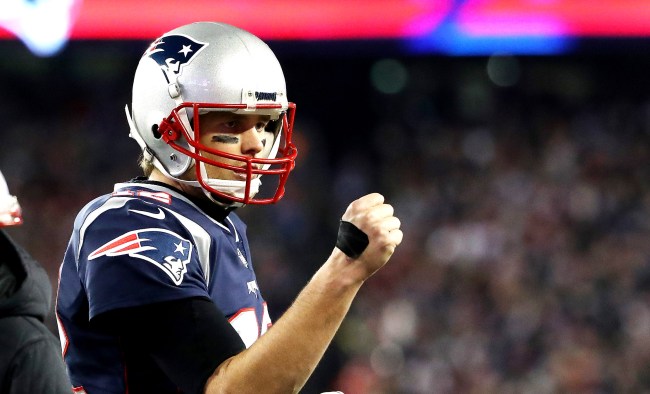 Tom Brady’s thumb injury during the 2018 playoffs was FAR worse than anyone realized at the time, and yet, somehow, he still went on to win Super Bowl LIII.

A new book by Jeff Benedict titled The Dynasty is coming out on Tuesday and in it the author shares details about Brady’s thumb injury that have never been revealed before.

On the Wednesday before the AFC Championship game against the Jacksonville Jaguars, the Patriots were practicing outside in the bitter cold. On a routine play, Brady handed the ball off to running back Rex Burkhead. In the exchange, the ball jammed back into Brady’s thumb, hyperextending it with such force that the skin at the base of the thumb split open. With blood gushing, Brady let out a yell and rushed off the field, clutching his hand. Burkhead and his teammates looked on in stunned silence.

It looked as though Brady’s hand had been slashed by a blade. The base of his thumb was split wide open. The laceration was gaping.

“Holy sh*t!” Leibman said to himself.

In 99 percent of the cases where a hyperextended thumb results in a gaping laceration, there is also a fracture or dislocation involved. And the underlying ligaments and tendons are inevitably damaged as well.

When Liebman finally looked at Brady’s thumb in person he said the gash was “deep enough that he could see down to the bone and tendon.”

Four days later, Brady played in the AFC Championship game versus the Jacksonville Jaguars and led the Patriots to a fourth quarter comeback with two touchdown drives to win 24-20.

In the locker room after the game, Brady told Leibman, “I thought this injury was going to be the end of my career.”

And while Brady’s coach Bill Belichick may not have been overly impressed by his quarterback’s feat that day, Dr. Leibman was ppretty well gobsmacked by the performance, “I still don’t understand how he played. It doesn’t make any sense to me. He played with a surgical incision on his throwing thumb.”

Read the entire excerpt from “Threading the Needle,” Chapter 42 of The Dynasty, over the the New York Post.