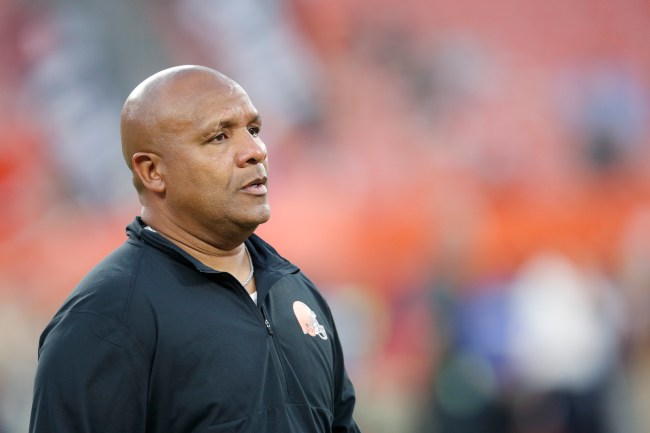 Hue Jackson did one of the worst coaching jobs in NFL history when he was with the Cleveland Browns, compiling a pathetic 3-36-1 overall record before being canned in the middle of the 2018 season. During that tenure, Jackson led his team to a 1-15 record in 2016, and followed that up by going 0-16 in 2017, which is just painful to even write; especially as a diehard Browns fan. Sure, all that losing led to back-to-back No. 1 overall picks — which the team used to take studs like Myles Garrett and Baker Mayfield — but, damn, what a miserable couple of seasons.

Don’t get me wrong, Hue Jackson never stood a chance in Cleveland. He lacked any semblance of discipline, was forced to work alongside coaches he clashed with and the front office was trying to use analytics and acquire draft picks rather than bring in players. It was a terrible experiment.

Considering Jackson’s time in Cleveland will be best remembered as a failure — and then his mini beef with Mayfield afterwards — one might think the head coach would shy away from saying positive things about the experience. Oh, but not Hue Jackson, who actually said that his 3-36-1 record was “some of the best coaching I did.” Seriously, he boldly stated that while talking to WFNZ in Charlotte.

"I think during those times [it was] probably some of the best coaching I did contrary to what people think." – former #Browns coach Hue Jackson to @NickWilsonWFNZ & @JoshParcell on our sister https://t.co/SZ1DsNQdTZ station @WFNZ in Charlotte, NC on his time in Cleveland.

That’s insane, right? Well, Hue Jackson didn’t stop there, because he actually tried explaining why he believed his Browns tenure was good coaching in his mind.

“I learned a lot,” Jackson told Wilson and Parcell. “I think the two years of constant losing I learned how to overcome that and still get guys to follow me and trust in what I was trying to accomplish. You learn a lot about yourself that you gotta be able to stand in front of a group and keep them really going.

“I’ve said this before I think during those times [it was] probably some of the best coaching I did contrary to what people think because you’re always doing anything and everything you can to find a way to win. Whether it happens or not, that’s not up to me sometimes but I think I learned a lot being in that situation.”

Basically, because Hue Jackson said he was trying to win games means he was doing a good job. Uh, dude, you’re paid to win games, not just put in the work to try and do it.

Once Twitter got hold of Jackson’s claim, they let him hear it. See some of the reactions to Hue’s claim below, which clearly rip the former Browns head coach.

That was some of the best coaching you’ve done? Wow. What is worse than worst?

I would hate to see his worst coaching then.

His “best coaching” put him in the record books.

"Delusional" : characterized by or holding idiosyncratic beliefs or impressions that are contradicted by reality or rational argument, typically as a symptom of mental disorder

So 3-36-1 is what an organization can expect when you deliver your best coaching?! Wow.

Hue Jackson’s time with the Cleveland Browns is forgettable AF. Who cares if he brought the team two No. 1 overall picks, because when you’re 33 games under .500, there’s absolutely no moral victories that can be had.