Hue Jackson Spoke About Why He Bailed On The Kaepernick Workout, And Which Team Would Be A Good Fit For The QB 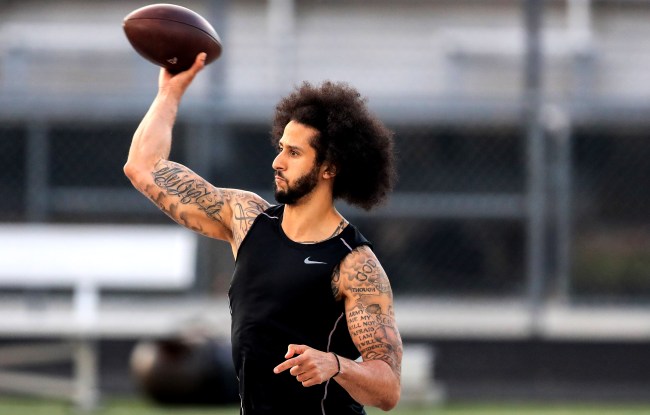 On Saturday, just prior to when his workout for NFL teams was going to take place, Colin Kaepernick announced that he was changing the location from the Atlanta Falcons practice facility with former Browns head coach Hue Jackson running the drills to a high school football field in Riverdale, Georgia because he didn’t trust the NFL and wanted the workout to have transparency.

The very broad waiver that the NFL wanted Kaepernick to sign prior to the workout played a large part in why the move was made.

Everything surrounding the workout turned out to be, as Cowboys owner Jerry Jones believes, a “circus” and probably “wasn’t about football” at all.

On Tuesday, Hue Jackson sat down and spoke with Kristine Leahy on her show Fair Game to give his perspective on Kaepernick’s workout, including why he decided to exit the event after the abrupt location change.

This Colin Kaepernick deep ball during his workout was beautiful. pic.twitter.com/HOZnclngZZ

“You get there early in the morning and you start thinking that you’re going to lead a workout for a young man who I think is still a very talented person, and as you dive into it, as the day starts to move forward, you realize that things are starting to change,” Jackson told Leahy.

“And there were conversations that I could hear in the room, that there was potential that it might not work out,” Jackson continued. “I didn’t understand at all and I wasn’t going to try to be a part of that. I just, I was surprised when it got be about 2:50 when I heard that the workout was going to be moved. And that maybe I was not going to be a part of it, was I going to be a part of it? I needed to find out as fast as I could so I did text Colin’s agent, who they would have loved for me to be a part of it, but it was so far away, and then I fetl a responsibility and obligation to the National Football League because they’re the ones who asked me to do it.”

“So I made a decision, the best thing for me to do is get on a plane and go home,” he concluded.

“I thought it was, at the end of the day, I would have loved to hear that ‘I appreciated people from the league office who were taking their time away from their busy schedules to be here’ and I never heard that,” Jackson added, referring to Kaepernick.

When Leahy asked Jackson flat-out if Kaepernick should be playing in the NFL, he replied, “I do. With the right team and the right environment and the right people. I mean, every quarterback’s not for everybody. But does he have enough talent? I want to believe that, but I still haven’t seen him play in quite awhile.”

Leahy then asked Jackson what team would be right and have the right environment.

He said it has to be a team with an experienced coach who can handle the media, a team with a strong locker room, and mentioned the Pittsburgh Steelers as one example of a team with those characteristics.

As for whether he thinks Kaepernick will ever play in the NFL again, Jackson said he hopes he does, but that he doesn’t see that happening right now.