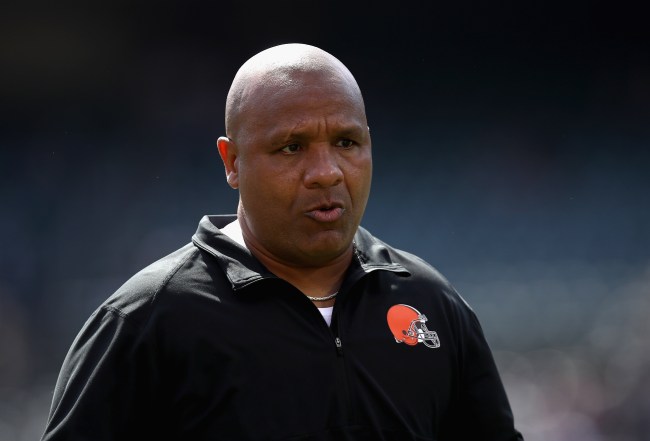 It’s been 10 months since Hue Jackson told his team’s owner and general manager to “get the f— out” of his office after being informed he’d been fired.

The Browns relieved Jackson of his duties on October 29th of last year after going 3-36-1 in two-and-a-half seasons with the Browns, the worst record a head coach has posted while coaching one team in NFL history.

Sports Illustrated released an awesome piece covering the collateral damage of Hue’s firing to his psyche, his confidence, and his relationship with his family.

After the Browns fired him last Oct. 29 he grabbed a few things and left the facility, never to return. Then he drove as fast as he could, windows all the way up, no radio.

“He called his wife of 24 years, Michelle, and filled her in. At home he went down to their basement, turned off the lights in the guest room and stayed there. For three days. “I could have laid there for months,” he says.

Jackson says he’d never experienced depression before last fall, never descended so deeply into unending gloom. He refused to turn on the television, knowing he might stumble across the ridicule. He ate only when Michelle delivered him meals. He worried about his three daughters, his mentors, even his old team. He was certain he had failed all of them.”

Weeks after Jackson’s firing, he’d receive text messages from friends trying to distract him with plans and excursions, to which he’d respond, “STOP TEXTING ME.” Same.

Hue’s sorrows were only exacerbated by the deaths of his mother and brother, who passed away two weeks apart in August of 2018, two months before he would lose his job. His mother had been ill for quite some time, but his brother died unexpectedly.

Now, as the Browns are finally well-equipped to have the season Jackson hoped to have during his tenure, the 53-year-old coach wants none of it. He is moving his family from Cleveland to the Cincinnati area and hoping someone will take a chance on him.