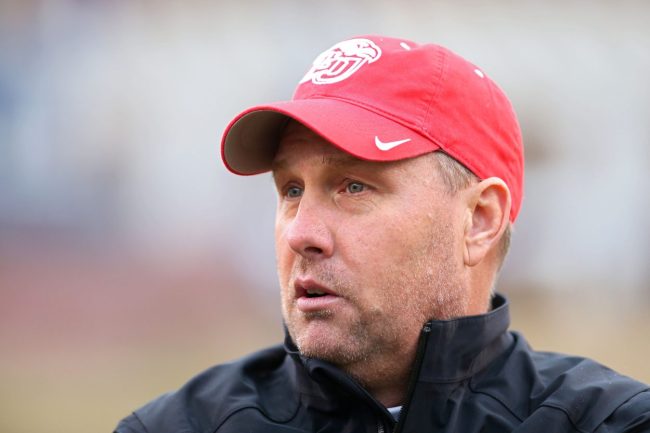 The beef is officially very real between Lane Kiffin and Hugh Freeze and it couldn’t be funnier. Ole Miss’ current head coach fired shots at his school’s former head coach on Twitter and started a feud between the two.

On Friday, Kiffin trolled Freeze after landing a prominent transfer. While Freeze was in Oxford, prior to being fired with cause for calling escorts on a school-issued cellphone, he would celebrate big-time commitments by posting a picture of himself with a big fish on Twitter.

Now that he is at Liberty University, he continues to do the same. Freeze posted a picture with a bass earlier this week.

On Thursday, Ole Miss received a commitment from transfer running back Zach Evans. Evans was a five-star, No. 2-ranked running back recruit in the class of 2020 and had a big year at TCU as a freshman.

In response, Kiffin quote-tweeted Freeze’s bass with a picture of him holding a Mahi Mahi. It was a vicious direct shot at Freeze, who Kiffin and Ole Miss handily beat at home in November.

After the fact, Freeze proceeded to get really salty with his retweets. Of the few posts that he retweeted, the 52-year-old phony preacher man discussed the size of the two fish.

One looks above average and one below average… Bigger doesn’t always mean better @Lane_Kiffin https://t.co/Saha8jhqOb

For starters, the information is inaccurate. The average weight of a Mahi Mahi is between 15 to 29 pounds, according to a quick Google search.

But that is beside the point.

By retweeting this post, Freeze is indirectly implying phallic deficiency. When it comes to size, Freeze used the oldest defense in the book.

“It’s not about size, it’s about how it works.”

Now, there is one way to find out where Freeze stands… but that would require a trip to Tampa Bay. Perhaps it is easier to let Freeze expose himself.