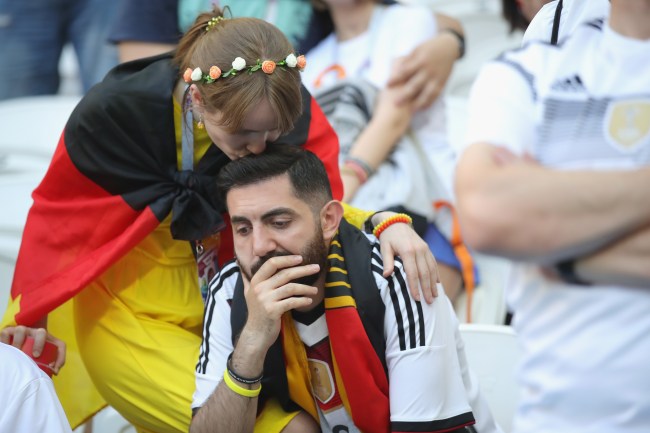 World Cup defending champion Germany was sent home early today after a crushing 2-0 loss at the hands of an already eliminated South Korea team. When you consider Germany’s success in the Group Stages for the past 64 years, its early exit seems even more shocking:

For the first time since 1950, the World Cup will enter its latter stages without Germany, marking the third straight WC champion to not make it past the Group Stages of the tournament.

“The disappointment is just huge,” Germany manager Joachim Löw said. “In this tournament we didn’t deserve win the World Cup again. We didn’t deserve to be in the round of 16.”

Even South Korea manager Shin Tae-yong believed his squad has almost no chance at beating the World Cup favorites.

“Yesterday we said there was only a 1% chance to beat Germany, so I told my players that it was really a last-ditch effort for them,” Shin Tae-yong said. “And I thought about what mistakes what Germany could make.”

Mexico and Sweden survived and advanced out of Group F, and the internet was entirely present to mock Germany for shitting the bed.

Fans were 😭 after Germany's #WorldCup defeat to South Korea.#KORGER pic.twitter.com/JAXV3QLUrc

Football is a simple game. Twenty-two men chase a ball for 90 minutes and at the end, the Germans no longer always win. Previous version is confined to history.

#WorldCup Germany trying to go through the last 16 pic.twitter.com/1HYB9MfFyx

They think it’s all over, it is now! Sorry Germany 🇩🇪🙃 #KORGER #MEXSWE pic.twitter.com/XF1AUZeauY

#KORGER Korea Goalkeeper was the reason Germany failed to qualify. What a performance 👏👏👏 pic.twitter.com/cbu7LhKHFE

The South Korea goalkeeper – "also known as the Mexican Saviour or the one true god" pic.twitter.com/wK7ZAPaVoJ

There’s always next year. And by next year I mean four years from now.