The Internet Roasts Rockets’ P.J. Tucker For His Insane Brain Fart That Almost Resulted In A Loss To The Lowly Knicks 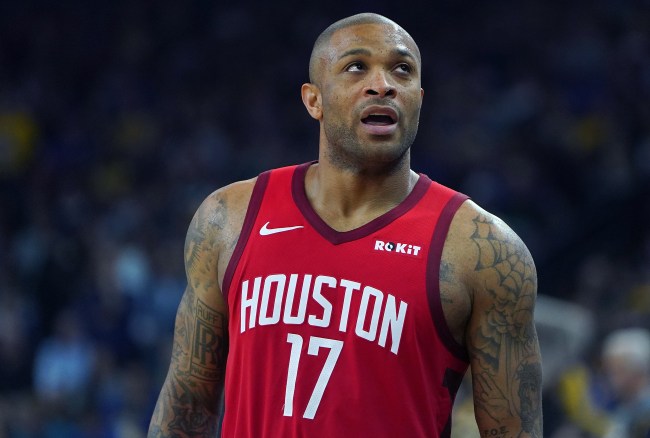 You may not believe this but the 10-36 New York Knicks almost beat James Harden and the Rockets at Madison Square Garden last night. Granted, the Knicks were basically playing 6-4 for the last minute when Rockets small forward P.J. Tucker decided to switch allegiances. In the final minute, Tucker fouled a three-point shooter, got beat defensively for the go-ahead layup, and had a brain fart that Twitter has been trying to dissect through the night.

Tucker may have had money on the game or someone at Buffalo Wild Wings pushed the ‘overtime’ button, but the Knicks are the Knicks and failed to take advantage of the golden opportunity, ultimately falling to the Rockets 114-110.

But check out this play. With the Rockets clinging to a three-point lead in the final minute, Tucker decided not take receive the inbound pass. Why? Fuck if I know.

I’ve officially seen it ALL with this all time brain fart by PJ Tucker pic.twitter.com/JrgB9HybYa

PJ Tucker has to be smoking crack pic.twitter.com/5bwfoytRxe

Win or Lose this is for you PJ Tucker pic.twitter.com/FeNQpN3ahf

James Harden had to drop 61 points and overcome a PJ Tucker mini stroke to beat the Knicks by 4 points.

And what an awful last minute from PJ Tucker. Don't think he could play much worse that stretch between the foul on the 3 attempt, the inbound pass brain fart, & getting beat for a go ahead layup.

Pj Tucker being a real friend keeping the game close so harden can get 60 pic.twitter.com/zbTdMxP7rz

Does PJ Tucker want the Knicks to have worse draft odds or something? What was that? lol

what the fuck is wrong with PJ

After the game, Rockets coach Mike D’Antoni tried to explain the blunder.

Coach D’Antoni explains what happened with PJ Tucker on that late turnover on the inbounds pass. pic.twitter.com/FxsDN7PhmJ

Yeah, not cuttin’ it bro.