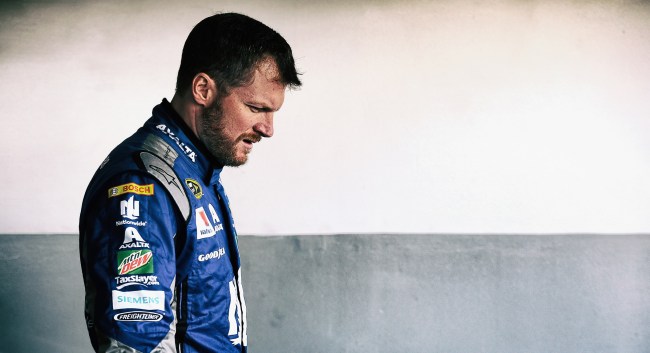 Last August, the world of racing experienced a scare when one of its all time most poopular drivers, Dale Earnhardt Jr., his wife Amy, and 15-month-old daughter Isla were on board a plane that crashed and caught fire shortly after takeoff.

Luckily, everyone on board, including their dog, survived and even managed to escape without any serious injuries.

This past July, a NTSB preliminary report revealed that part of the landing gear had collapsed and a section of the right wing hit the runway in Elizabethton, Tenn. as the plane bounced twice before touching down a third time with about 1,000 feet of paved surface remaining.

The report also stated, according to ESPN, “As they were attempting to get the rear exit door open, heavy smoke was coming from the lavatory. Mr. Earnhardt reported that he told Mr. Melton to try the main cabin door. At this time fire was now visible in the lavatory.”

Melton then kicked open the main cabin door wide enough so that he could exit.

“Earnhardt then handed his daughter, who was in his arms, to the pilot, and then they each squeezed out the opening,” which was roughly the size of a conventional oven, the report said.

Fast forward to Wednesday and National Transportation Safety Board safety regulators officially placed the blame for the crash on decisions made by the pilots.

The agency’s final report concludes the pilots’ decisions “resulted in a bounced landing, a loss of airplane control, a landing gear collapse, and a runway excursion.”

The pilots did not properly use the speed brakes and thrust reversers to stop the plane, and because of that, they lost the ability to go around and make a second attempt at landing.

The plane, a Cessna Citation, rolled off the end of a runway and caught fire after landing, according to the Federal Aviation Administration just after the accident.

The Earnhardts sustained minor injuries, and the pilots were unharmed, according to a NTSB report.

The NTSB also released numerous photos showing the aftermath of the crash, which show just how lucky Earnhardt and his family were to escape the crash alive.

The NTSB's final report cites pilot error as the cause of the 2019 plane crash involving Dale Earnhardt Jr. and his family.https://t.co/7VO0kAj1Vk